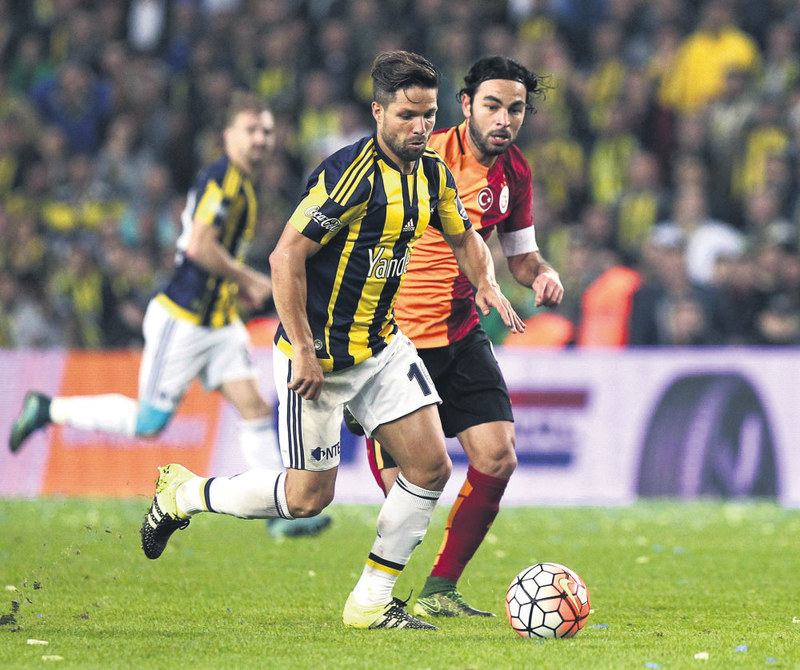 With the Intercontinental Derby between Fenerbahçe and Galatasaray resulting in a 1-1 draw, the Lions have now gone 16 years without being able to snatch a win away from home against the Yellow Canaries. The club has had six presidents and eight coaches since they last went to Kadıköy and came back with a win

The match that all of the Turkish footballing world was waiting for resulted in a disappointing draw for Fenerbahçe and Galatasaray. Fenerbahçe hoped to gain an advantage in the title race by getting three points from the match against their biggest rivals while the title holders Galatasaray, who won their 20th championship and fourth star in the last year in Spor Toto Super League, are still struggling for a win on the Anatolian side of Istanbul.

Fenerbahçe scored first in the 37th minute when the Yellow Canaries' Brazilian attacking midfielder Diego found the net from outside the penalty area, scoring his first goal of the season. Some commentators, former referees and Galatasaray fans alleged that he should have been called off. Diego was then shown a yellow card by the referee as he kicked the corner flag while celebrating.

The home team appeared to hit the brakes down the stretch, seeking to preserve the narrow lead, all the while setting in motion a Galatasaray comeback late in the second half when the Lions managed to equalize thanks to a close-range header by winger Olcan Adın in the 84th minute. Adın came on for left-back Lionel Carole, who sustained an injury in the first half. In the standings, Galatasaray and Fenerbahçe each moved to 18 points, trailing league leader Beşiktaş by one point. Beşiktaş played against Antalyaspor on Monday evening.

Sunday's game ended the Lions' four-match winning streak, after they beat Trabzonspor (1-0), Gaziantepspor (2-1), Medipol Başakşehir (2-0) and Gençlerbirliği (4-1) in the league. Galatasaray also edged out Benfica 2-1 in a UEFA Champions League match on Oct. 21. The Lions' Dutch star Wesley Sneijder is out for the next game against Eskişehirspor at Turk Telekom Arena after being booked on Sunday.

Fenerbahçe coach Vitor Pereira went berserk after Galatasaray's goal. He reportedly said to Joseph de Souza: "How could you allow a man who is half your height to hit a ball with his head and score."

Pereira said in a press conference: "Tonight we played very well. We dominated every part of the game. But this is football. Our rivals found the net thanks to a single mistake. There is nothing else to say."

On Olcan Adın's goal, he said, "That was unbelievable. We were in the right position. But the ball went down very quickly. Still, I don't understand how we conceded that goal."

Galatasaray coach Hamza Hamzaoğlu said, "While we played for a long time in a 1-0 hole, we felt relieved after we equalized. However, we absolutely wanted to win and I'm not happy with the result."

He also discussed Olcan Adın's goal saying, "When it comes to side balls, nobody can guess to whom the ball will come. The ball found Olcan who was between two opponents. And he found the net."

Fener's goal scorer Diego Ribas said, "I scored in the match but I'm not happy because we could not win. We fell back in the last minutes and it is natural. We were 1-0 ahead. Despite their heavy pressure they could only find the goal from a dead ball. We conceded the goal because of a moment of carelessness."
RELATED TOPICS