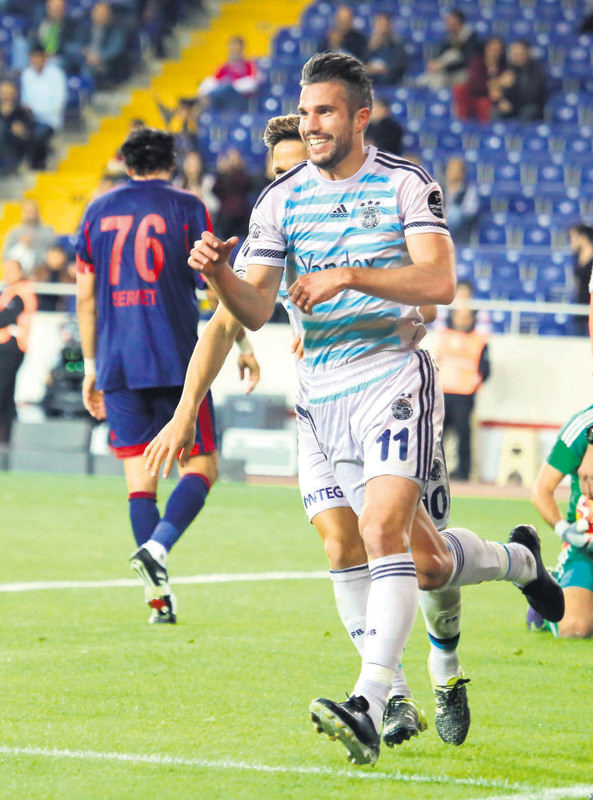 The Yellow Canaries have been in the habit of winning by one goal margins since Pereira took charge. They managed to break their habit while maintaining their winning run when they cruised past Mersin İdmanyurdu 3-1

The Spor Toto Super League reopened the curtain on Saturday after a two-week interlude as second-ranked Fenerbahçe comfortably dispatched rivals Mersin İdmanyurdu 3-1 at the Mersin Stadium. The Yellow Canaries have been in the habit of winning by one goal margins since Portuguese coach Vitor Pereira took charge in the summer. They managed to break their habit while maintaining their winning run when they cruised past Mersin İdmanyurdu 3-1, with the goals from Hasan Ali Kaldırım, Luis Nani and Robin van Persie. The only Mersin İdmanyurdu goal came from Nakoulma Prejuce. Fenerbahçe raised their points tally to 27 sit in top position at least temporarily. Although Fenerbahçe adopted a habit of getting one goal wins, they have at least been winning. Under Pereira's management, Fenerbahçe have won all nine of their matches in the last 55 days. Pereira has been criticized by both fans and the media due his defensive style. However he has refused to back down and for as long as the team is winning, the critics are likely to stay quiet. Fenerbahçe have also made their best start after 12 games of the last six seasons.

Fenerbahçe coach Pereira said in the post-match press conference, "We were so good that we could have won even 6-1, 7-1 or 8-1. We controlled the game very well and we kept possession of the ball. When we lost the ball, we pressed. We found a lot of opportunities."

Fenerbahçe coach since June, Portuguese technician Vitor Pereira was Andre Villas-Boas's assistant when FC Porto won the 2010-11 UEFA Europa League. He later claimed two league titles as the Dragons' coach and a domestic double in Greece with Olympiacos FC in 2014-15. Beaten 3-1 in Istanbul on matchday one, Fenerbahçe will look to get revenge on Molde and perhaps join Ole Gunnar Solskjaer's side in the round of 32. Fenerbahçe will progress if they triumph and Celtic FC and AFC Ajax draw in Glasgow. Molde recorded a sensational 3-1 victory in Istanbul when the sides met for the first time on matchday one. It was their first encounter with Turkish opponents and the Yellow Canaries' maiden meeting with a Norwegian team.

As for Galatasaray, their losing streak continued despite hopes for a turnaround after the sacking of Hamza Hamzaoğlu. A last-minute goal two weeks ago put paid to their previous manager and interim coach Tafferel fell victim to a similar mistake as Galatasaray gave up their lead three times to draw 3-3 with Antalyaspor. Cim Bom raised their points total to 22 but stay five points behind Fenerbahçe. Two weeks ago they were stunned by Çaykur Rizespor 4-3 with a last-minute goal. And after that result the Galatasaray administration parted ways with coach Hamzaoğlu, despite the manager winning three cups last season, including the title. On Saturday, Galatasaray took the lead with a ninth-minute goal by Yasin Oztekin. Badur equalized for Antalyaspor after 64 minutes but Gala immediately hit back two minutes later with Lukas Podolski scoring. Eight minutes from time, Samuel Eto'o equalized from the penalty spot. Cim Bom fans thought they had the game won when Sabri Sabrıoğlu netted in injury time only for M'Bila Etame to snatch a point at the death. Mustafa Denizli, who is the only coach to have worked with Galatasaray, Beşiktaş and Fenerbahçe and win a title with all of them, is the current favorite to take over at the Turk Telecom Arena. Denizli, who has been working as a football commentator at state-run the TRT channel, said on his program, "I have not met Galatasaray administrators. However, I don't know whether I will meet them."
Last Update: Nov 23, 2015 1:07 am
RELATED TOPICS