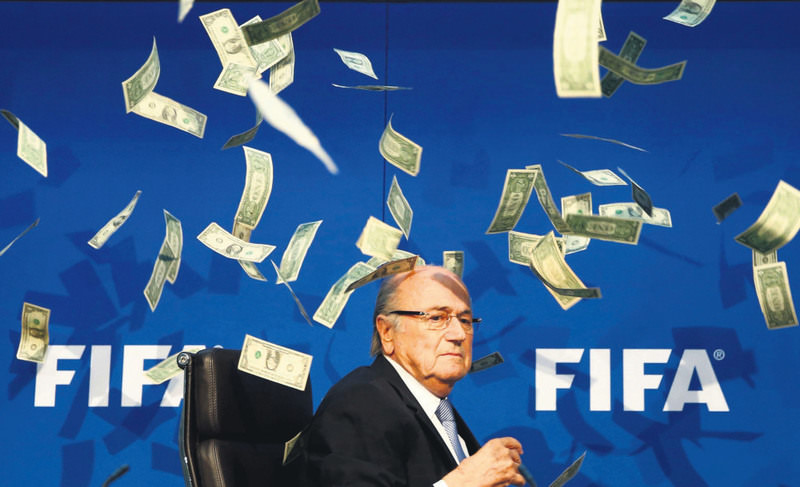 British comedian known as Lee Nelson (unseen) throws banknotes at FIFA President Sepp Blatter as he arrives for a news conference after the Extraordinary FIFA Executive Committee Meeting at the FIFA headquarters in Zurich, Jul. 20, 2015.
by Dec 03, 2015 12:00 am

World football body's executive committee was set to open a crucial meeting on Wednesday with major reforms up for review, as outsiders voice doubt that world football's tainted governing body is capable of fixing itself.

The reform package is the work of a panel led by Francois Carrard, who won praise for overhauling a graft-ridden International Olympic Committee more than a decade ago and is now tasked with a similar job at FIFA, mired in an unprecedented scandal.

At the two-day meeting at FIFA's Zurich headquarters, Carrard's proposals will be presented to the body's top brass - minus its suspended president and vice president, Sepp Blatter and Michel Platini, the highest-profile casualties of the chaos within the organization.

FIFA's executive committee can demand changes to the reform plan, but if approved the package will be sent for adoption at a meeting of FIFA's 209-member associations on Feb. 26, when Blatter's replacement will also be chosen.

A FIFA official, who requested anonymity, said that if the reforms are approved quickly this week, "it means their content is inadequate and won't change much.

"However, if there is a debate, it's a good sign."

The source's comments point to the main obstacle facing the reform effort: it must be approved by individuals who may be accustomed to FIFA's well-documented rotten ways.

In a preliminary report in October, Carrard's panel floated the prospect of capping presidential terms at 12 years and barring those over 74 from serving on the executive committee.

It further suggested that compensation for senior officials be published annually and audited by an independent body. The executive committee would also be stripped of some powers.

Whether or not those reforms will ever come into force is not yet clear.

But some say that despite Carrard's strong credentials, his mission is destined to fail, as his panel is dominated by FIFA-insiders, a clear departure from the lauded IOC clean-up team he led in the past.

"What is actually needed is an independent set of executives that have no ties in world football, walking in and cleaning this place up," said Declan Hill, author of "The Fix: soccer and organised crime."

That sentiment echoes calls from some of the major corporations which sponsor the World Cup.

Visa, McDonald's, Coca-Cola, and Budweiser's parent company Anheuser-Busch have all issued demands for outside figures to lead the rescue effort at FIFA.

On the eve of the much-anticipated meeting, Transparency International's chief Cobus de Swardt predicted Carrard's committee "will likely avoid taking some hard decision about changing the way FIFA does business", because doing so could affect the committee members themselves.

Whatever gets decided in Zurich, the glaring absences of Blatter and Platini will likely overshadow the meeting.

Both men have been implicated in a criminal corruption probe by Swiss prosecutors, which triggered 90-day suspensions imposed by FIFA's ethics committee.

FIFA's in-house court will decide this month whether to enforce tougher penalties urged by ethics investigators, including possible life-time bans from football.

Defenses and appeals by both men are pending, but Platini's chances of succeeding Blatter as FIFA's president seemingly grow more remote each week.

The European football chief had been the favorite to win the vote, backed by the support of UEFA.

Meanwhile, the five approved candidates continue to make their case ahead of the poll.

Platini's deputy at UEFA, Gianni Infantino, told AFP in India at the weekend that he would start the clean-up at FIFA on "day one" as president.

Their reactions to the Carrard reform plan will be closely watched by those calling for sweeping change within world football.
RELATED TOPICS