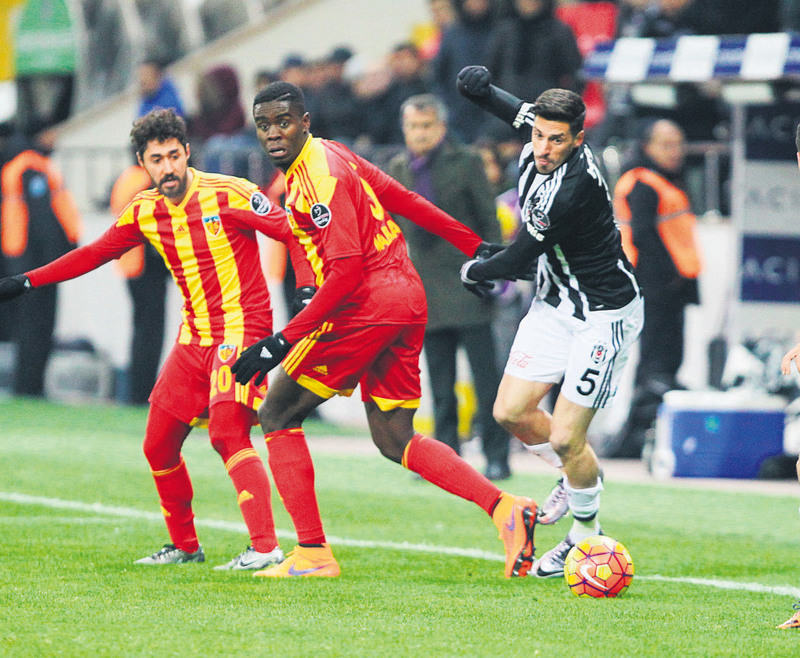 by Daily Sabah Dec 07, 2015 12:00 am
Despite poor results in recent weeks, Beşiktaş and Galatasaray are still hot on the heels of their archrivals Fenerbahçe, with both winning their matches in the 13th week of the Spor Toto Super League. Beşiktaş beat Kayserispor 2-1 at the Kadir Has stadium to move back into first place in the Turkish Super League ahead of former league leaders Fenerbahçe, who play against Gaziantepspor on Sunday after press time.

Mario Gomez opened the scoring after dribbling around the keeper and slotting the ball into an empty net. Diego Biseswar equalized for Kayserispor but Jose Sosa regained the lead for the away side from a set piece. Gomez earned himself a recall to the national team after an impressive run of form for the Black Eagles and Manchester United are also reported to be interested in the striker, according to the Telegraph.

Meanwhile, Galatasaray recorded their first win under coach Mustafa Denizli during his second reign as the Lions manager. The Istanbul giants looked short of confidence and retreated into their own half trying to pick off Bursaspor on the counter attack in the first half. The visitor's created a handful of chances and may feel that they deserved at least a goal from the opening 45 minutes.

Galatasaray's experienced manager Denizli must of had strong words at half time as the Lion's came out a different side. The former Arsenal forward Lukas Podolski got the home side off the mark with a powerful shot into the bottom corner in the 68th minute. Yasin Öztekin doubled his sides lead 12 minutes later while Podolski turned provider in the 90th to set up Burak Yılmaz. Galatasaray remain in third place with 26 points in 14 games and take on FC Astana during the week in the UEFA Champions league.

Beşiktaş coach Şenol Güneş confessed in a press conference after the match, saying they panicked after the Kayseri's goal. Güneş said, "Our rivals got good results in the last weeks. It was important to net two goals against them. However we gave them opportunities unfortunately. I think we deserved the win.

"Kayseri's goal panicked us. We should not have conceded that goal. We started well in the second half. With Kayserispor taking chance to find the net, we dominated the game."
Last Update: Dec 07, 2015 11:04 am
RELATED TOPICS