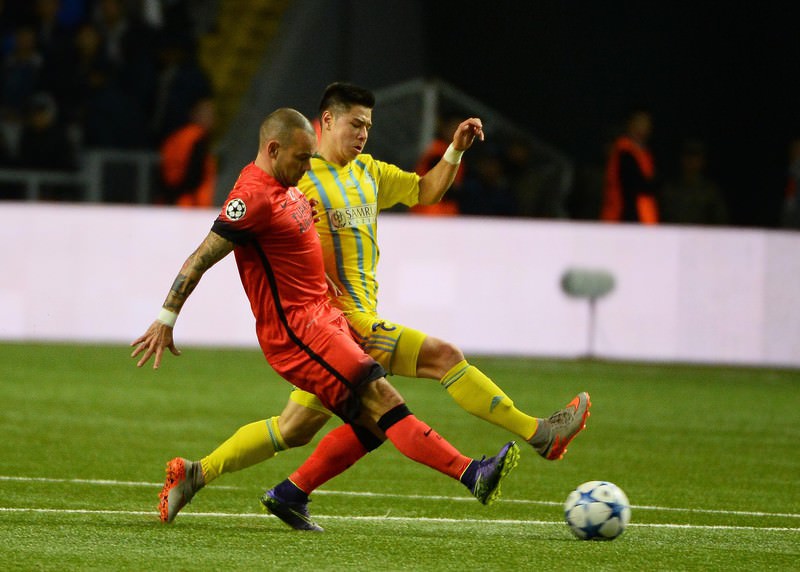 Third in Group C, Galatasaray hold a one-point advantage over Astana but the visitors will present a formidable challenge with a trip to the UEFA Europa League round of 16 on the line

The UEFA Champions League's group stage will wrap up with the final matches taking place today and tomorrow. Turkish powerhouses Galatasaray have a one-point advantage over Astana as the teams compete for third place in Group C and qualification for the UEFA Europa League. The Turks are favored, although their opponents have drawn their last two games against the top two sides in the section. The matchday two contest between the teams featured three late own goals, two of them enabling Astana to record their first UEFA Champions League group stage point. Galatasaray's Bilal Kısa gave the visitors the lead and in the final frantic 13 minutes first half Hakan Balta, then Astana goalkeeper Nenad Eric and finally Lionel Carole put the ball through their own net. The clubs are also more than sporting rivals: On April 29, 2014 they signed a memorandum of cooperation in Astana with the Kazakhstani team hoping to learn from Galatasaray's international experience.

Galatasaray are in their 14th group stage campaign, which started with a 2-0 home defeat by Atletico Madrid. After then drawing at Astana, they beat Benfica 2-1 at home and lost by the same score away before suffering another 2-0 loss to Atletico. Cimbom's best performance came in the 1988-89 season when they reached the European Cup semi-finals. They have lost only six of their last 23 European home matches.

In the other Group C match, Benfica and Atletico Madrid are already through, but the important prize of first place in Group C is still up for grabs when Benfica welcome Atletico to Lisbon. Having won 2-1 in Madrid in September, the Portuguese champions only need a draw, while Atletico require any win that is not 1-0.

Elsewhere, Real Madrid have already sealed qualification for the last 16 as group winners but Rafa Benitez's team needs a convincing performance to appease fans left disgruntled by the recent 4-0 mauling at the hands of Barcelona and the club's disqualification from the Copa del Rey for fielding an ineligible player. Malmo, meanwhile, need to better Shakhtar's result in the other game if they are to snatch third spot and a Europa League berth.

There is nothing riding on this game for PSG, who have already qualified for the last 16 and are certain to finish second in Group A behind Real Madrid. However, Shakhtar need to match or better Malmo's result in Madrid if they are to take third place and the consolation of a berth in the Europa League last 32.

As for Group B, Louis van Gaal says Manchester United only have themselves to blame ahead of today's winner-takes-all clash at Wolfsburg as they bid to avoid an early Champions League exit. Van Gaal's Red Devils must beat Group B leaders Wolfsburg to ensure their place in the knockout stages having allowed the Germans to usurp them at the top of the table by being held to a goalless draw at home to PSV Eindhoven a fortnight ago. Leaders Wolfsburg will reach the knock-out stages for the first time in the club's history with just a draw, while United, who are a point behind, know anything less than a win could see them eliminated.

Beaten and bruised, Manchester City entertain a revitalized Borussia Moenchengladbach today looking for a restorative victory that could yet yield a first-place finish in Champions League Group D.

PSV Eindhoven will advance to the knockout stage of the Champions League if they finish their Group B campaign with home success over CSKA Moscow today. Italian champions Juventus are aiming to avoid Europe's elite in the Champions League last 16 by sealing top spot in Group D at Sevilla.
Last Update: Dec 08, 2015 2:57 pm
RELATED TOPICS