Things to know about Turkey's group in EURO 2015 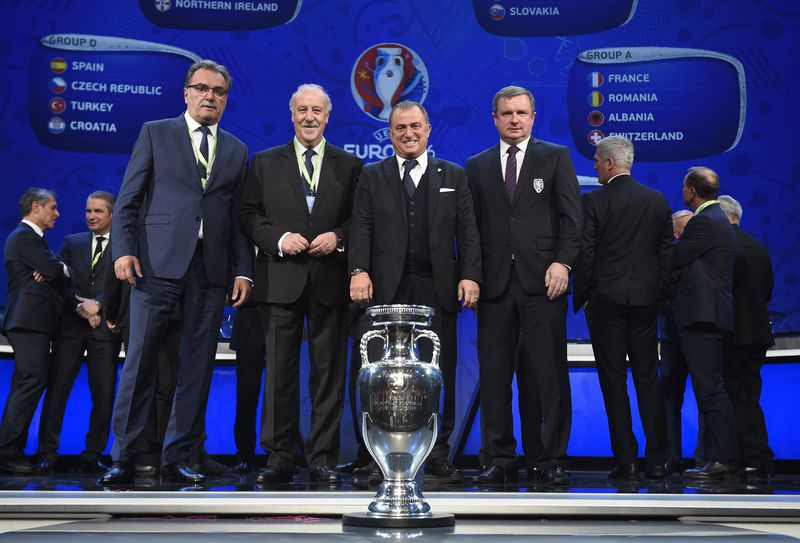 Representatives of teams drawn in group D (AFP Photo)
by Associated Press Dec 12, 2015 12:00 am
After the failure in Brazil, Spain wants to bounce back in style in France. After what should be an easy Euro 2016 opening match against the Czech Republic, the reigning European champion faces trickier Group D opponents in Turkey and Croatia.

Here are other essential things to know about Group D:

THE BIG MATCH: Spain vs. Czech Republic on June 13 in Toulouse. Spain can't afford to lose its opening game: It was the humiliating 5-1 loss to the Netherlands at the 2014 World Cup that set the tone for the team's dismal display in Brazil. A loss to the Czechs would give Spain no room for more mistakes in its next match against Turkey.

"It's going to be very difficult for us," coach Vicente del Bosque said.

PLAYER TO WATCH: Turkey captain Arda Turan, who joined Barcelona this season from Atletico Madrid. Turan has had more time for the national side since his high-profile summer move to Barcelona, having to sit out of Spanish matches for the rest of 2015 due to transfer rules.

PROJECTED TOP TWO: Spain and Turkey. By winning nine of 10 games and finishing top of its group in qualifying, Spain showed it has recovered from its World Cup humiliation. Spain also has pedigree, as the only team to have won the European Championship twice in a row.

Turkey overcame a poor start in qualifying and posted convincing wins against the Netherlands and the Czech Republic to reach the Euros for the first time in eight years.
Last Update: Dec 12, 2015 11:45 pm
RELATED TOPICS