Eto'o nears record as he scores in 8 consecutive games 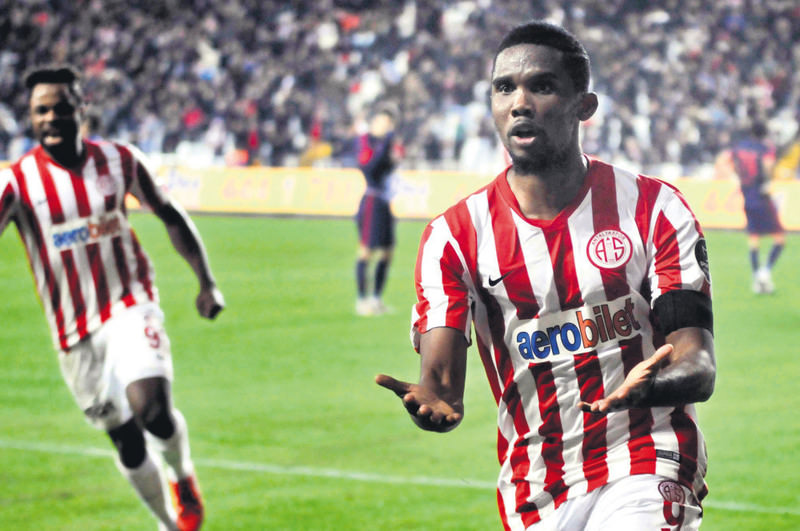 by Hakan Baş Dec 15, 2015 12:00 am
Antalyaspor's flashy summer signing Samuel Eto'o continues to look like the signing of the season as his scoring run in the Spor Toto Super League continues. The Cameroonian striker has managed to find the net 13 times as of the 15th week and by doing so has equaled the eight-week record scoring streak set by Fenerbahçe's Jose Fernandao's when he played for Bursaspor. He scored every week between the 12th week and the 19th week. Fernandao scored in eight consecutive games, a record for a foreign footballer in Turkey. If Eto'o scores against Trabzonspor in the 16th week, he will be the new record holder. Eto'o's transfer caused a big stir at the beginning of the season and he has led Antalyaspor with his 13 goals and three assists.

The world famous Cameroonian footballer Eto'o has been the subject of jokes in Turkey for a decade. The joke is: "Eto'o is done." It means that Eto'o's transfer is done. But it can also means in Turkish that Eto'o is a washed-up footballer. Some years ago, a Turkish TV commentator Oktay Derelioğlu said: "Eto'o (transfer) is done." And he repeated it several times. The transfer rumor, which came from Derelioğlu's source, was not right and the Cameroonian did not come to Turkey. After that, "Eto'o is done," turned into a joke. It went viral and comical videos were made for websites like YouTube. When his transfer was completed, some Turkish commentators and sports writers said, "He is finished," or "He is coming to Turkey for a vacation." However, Eto'o has embarrassed them with his performance in the fourth week of the Super Toto Super League.

The TL 4.5 million ($1.4 million) transfer sum Antalyaspor paid for the striker has been richly rewarded with 13 goals and three assists, not to mention the attention he has brought to the otherwise unheralded team. Antalyaspor have won and drew five games and have 20 points. Moreover, the 34-year-old Eto'o has attracted attention with his leadership and has become the captain of his new team. His annual cost for Antalyaspor is 3.5 million euros. But he has already earned his club TL 4.5 million because every club is awarded TL 1.3 million for each win and TL 650,000 for each draw in the Super League. Also, Antalyaspor have been able to raise their income with sponsorship deals, Passolig cards and merchandise thanks to the signing of Eto'o.

Regarded as one of the best African footballers ever, Samuel Eto'o has played for many well-known European football sides such as Barcelona, Inter Milan and Chelsea. Eto'o managed to lift the Champions League trophy three times with two different clubs. He won it twice in 2006 and 2009 with Barcelona and claimed it once in 2010 while playing for Inter.
RELATED TOPICS