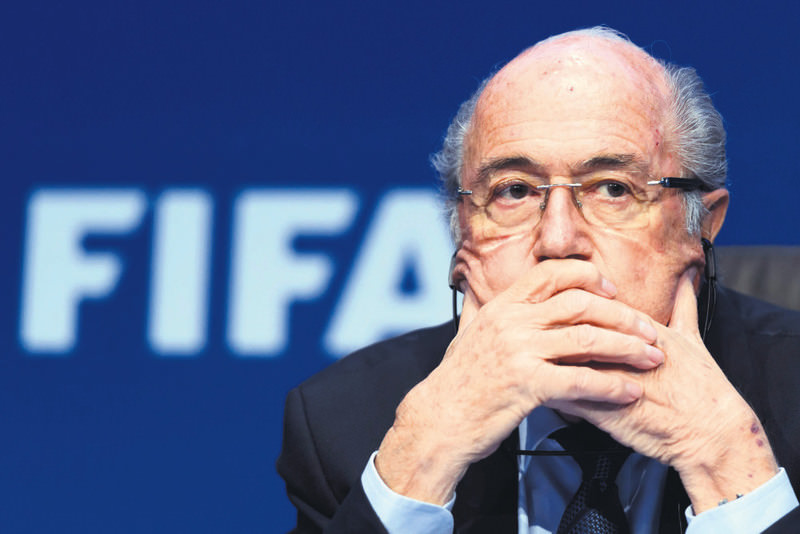 by Daily Sabah with Wires Dec 18, 2015 12:00 am
Suspended FIFA president Sepp Blatter (above) appeared before the world body's ethics judges Thursday to answer corruption allegations as Switzerland announced it has frozen tens of millions of dollars in accounts linked to football bribes. Blatter, who with vice president Michel Platini faces a long suspension, arrived at FIFA's base in Zurich in a black Mercedes with his lawyer. He made no comment. Before the hearing, Blatter, 79, wrote a letter to FIFA's 209 members calling the FIFA ethics commission's investigators "the inquisition". As the hearing went ahead, Russia's President Vladimir Putin, whose country will host the 2018 World Cup, said Blatter should be a Nobel Peace laureate.

Blatter is under criminal investigation in Switzerland over a two million Swiss francs ($2 million) payment made to Platini in 2011 for work carried out about a decade earlier. Platini's case will be heard on Friday, but he has said he will boycott the tribunal. His lawyers will go however. The ethics committee chamber is expected to announce its verdict next Monday. Appeals to a FIFA appeal committee and the Court of Arbitration for Sport are then possible. The United States asked Switzerland to freeze about 50 accounts in Swiss banks linked to its massive inquiry into football corruption. The action involved about 50 accounts in 10 Swiss banks. Numerous FIFA members are known to have accounts in the country. Meanwhile, El Salvador police say they have arrested the country's former soccer federation president Reynaldo Vasquez, who is wanted by U.S. authorities on corruption charges relating to the growing FIFA scandal.
RELATED TOPICS