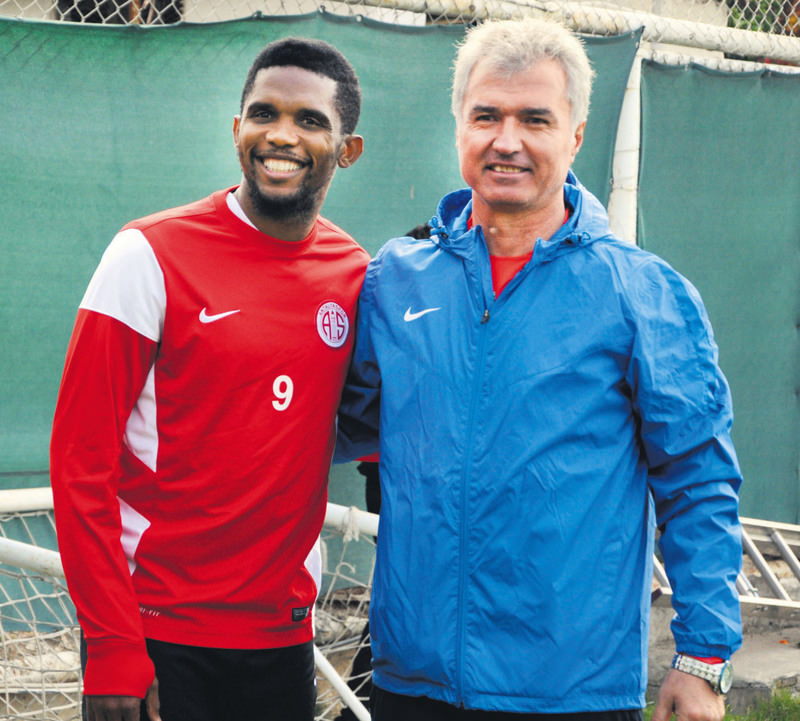 by Dec 18, 2015 12:00 am
Cameroon's former striker Samuel Eto'o has taken a new step in his much-travelled football career by taking temporary charge as joint-manager of Turkish top flight side Antalyaspor.

Eto'o, who joined the hugely ambitious Mediterranean side this season, will remain as a player and captain while co-managing the side alongside technical director Mehmet Uğurlu, the club said. The move comes after the exit of former boss Yusuf Simsek, who lasted only half a season at newly-promoted Antalyaspor, with its current mid-table position not sufficient to satisfy the team's lofty ambitions. Eto'o on Tuesday night oversaw his first game in charge, a 2-1 Turkish cup victory against Giresunspor, with pictures showing him gesticulating wildly from the touchline.

"I thank my teammates for the fight they showed. What goes on in the dressing room stays there. I can't give details but the players are fulfilling my philosophy," he said to Turkish press Thursday.

Hasan Ali Ceylan, the vice president of Antalyaspor, said that Eto'o and Uğurlu would remain in charge for the next matches up to the New Year break "when the new coach will be determined."

"The board believes both in Mehmet Ugurlu and captain Eto'o. We want to continue with attacking football in the upcoming matches," he said.

With Antalyaspor ninth in the Super League, Eto'o will be in charge for critical league clashes with Trabzonspor on Saturday and Gaziantepspor on Dec. 26 before the three-week winter break. It is unclear if Eto'o will have a role in the new coaching set-up, with Ceylan saying the club wants to have a Turkish figure appointed. Turkey is the latest stop in Eto'o's eclectic career which has seen him perform for the likes of Barcelona, Inter Milan, Chelsea and Sampdoria. He also played between 2011 and 2013 for Russian side Anzhi Makhachkala in the Caucasus region of Dagestan before the owner pulled the plug on his ambitions.
RELATED TOPICS