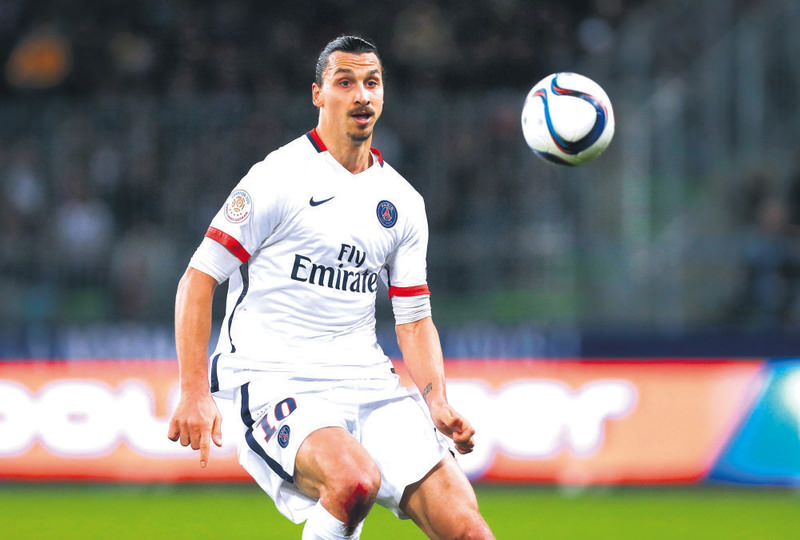 by Dec 21, 2015 12:00 am
Paris Saint-Germain go into the winter break with a Ligue 1 record points haul of 51 after a 3-0 away win at Caen lit up by a thrilling Zlatan Ibrahimovic (above) strike on Saturday. Already 1-0 up from an early Angel di Maria goal, Ibrahimovic produced a stunning 25-yard snap-shot that flew into the top corner of the Caen goal on 36 minutes. As the stadium rose to acclaim the giant Swede for the simple power and precision of his split-second effort, even the beaten 'keeper was left smiling. The win lifted PSG to a massive 19 points clear of Monaco, held to a goalless draw at Troyes. It also extends the star-studded Qatar-backed club's unbeaten record in the league to 28 games since March.

"This calendar year, 2015, has been a really, really good year for PSG," said coach Laurent Blanc. "But halfway through the season, records don't mean much to me," he warned. Summer-signing Di Maria rounded off the scoring with his sixth Ligue 1 goal since joining from Manchester United, making it 3-0 as he rounded off a slick team effort on 50 minutes.

"I was happy with the way many of the players, whose minds were on the long trips most of them were about to make. But you saw how they played, right from the off," said Blanc.

Caen 'keeper Remy Vercoutre deserves a special mention himself after saving four stinging shots in a bewildering first-half goalmouth scramble, two of them spectacular stops with the feet from Lucas Moura and Ibrahimovic. Not to be outdone PSG's German 'keeper Kevin Trapp then saved an 84th minute penalty from Caen's Andy Delort as the champions shone in every area against a side who went into the game in fourth place. Monaco picked up a point at Troyes despite their struggling hosts going a man down in the third minute with Mouhamadou Dabo's sending off. Rennes took the honors in the Brittany derby, beating Guingamp 2-0 for only their second win in their last 14 league games.
RELATED TOPICS