Fenerbahçe have forgotten how to lose at home in derbies 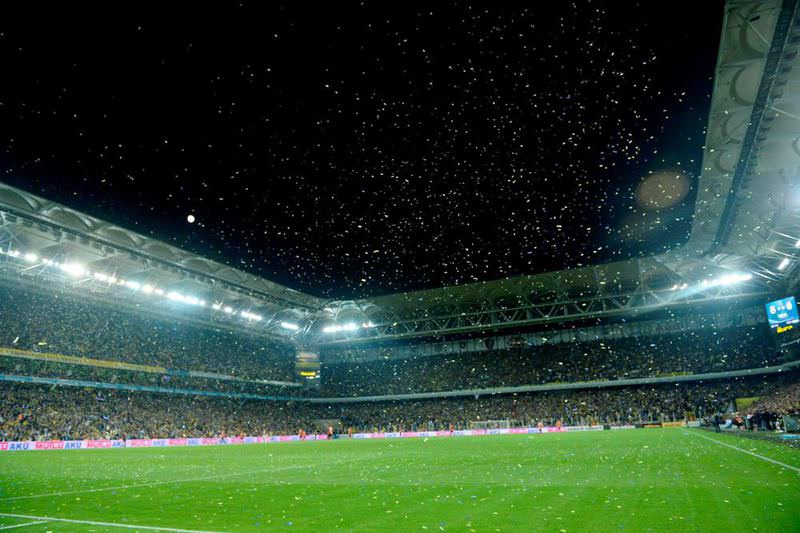 With the Yellow Canaries beating Beşiktaş 2-0 in Kadıköy, they maintained their dominance against their archrivals Beşiktaş, Galatasaray and Trabzonspor, who they have not won at Fener in 11, 17 and 19 years respectively

Fenerbahçe are enjoying a period of superiority in derby matches played at the Ülker Şükrü Saraçoğlu Stadium. They have not lost against Beşiktaş at home since 2005, Galatasaray since 1999 and Trabzonspor since 1997. On Monday, Fenerbahçe played a critical game against Beşiktaş, their biggest rivals for the title. The pressure was on the home side from the start of the game as a defeat for Fenerbahçe would have put them seven points behind Beşiktaş. Beşiktaş still have a game in hand after a fixture against Trabzonspor on Jan. 24 was postponed due to bad weather. It will be played in Trabzon on March 15. However, Fenerbahçe did not break with tradition and won the most important match of the season, beating Beşiktaş 2-0 and reclaiming the top spot in Super League. Volkan Şen scored the first goal of the game in the third minute, while Portuguese midfielder Luis Nani struck the second goal towards the end of the second half in the 82nd minute. Fenerbahçe now lead the table with 53 points, two points above rivals Beşiktaş. Third-placed Torku Konyaspor has 40 points. Medipol Başakşehir and Galatasaray make up the top five with 39 and 37 points each.

Fenerbahçe have forgotten how to lose against their biggest rivals at home. They have not been defeated by Galatasaray in the last 17 matches, Beşiktaş in the last 11 matches and Trabzonspor in the 19 matches.

Fenerbahçe head coach Vitor Pereira said, "We deserved the win. The title race will continue until the end of the season and we proved that we are in it. We are the only team that represent Turkey in Europe. Although we are tired because of the UEFA Europa League match against Lokomotiv Moscow, we succeeded in winning.

"The first goal we scored was a pre-trained goal. We discussed it with the technical staff. Thanks to that goal we dominated the match.

"I don't like to evaluate the footballers individually. But I must say that our goalkeeper Volkan Demirel played superbly. Mehmet Topal and Gökhan Gönül played despite their injuries. I thank all of them for their sacrifices."

Beşiktaş coach Şenol Güneş, who has coached various teams over his 28 year career, was unable to overcome Fenerbahçe in Kadıköy. He has coached Trabzonspor, Boluspor, Antalyaspor, Sakaryaspor and Bursaspor before Beşiktaş but he has not left Kadıköy a winner with any of his former clubs. Güneş said, "We are sorry for losing against Fenerbahçe. We are a good team. We were leaders and we were supposed to be stay leaders after this match. When we attacked we could not return to our half in time. This was our deficiency. But we dominated the second half. We could not benefit from the positions we found. The race is going on. Even if we had won, the race would have been continuing."

Fenerbahçe goalkeeper Volkan Demirel said that Beşiktaş are one of the best teams in the Super League but they could not do anything against them. On his superb performance he said, "Volkan Demirel can carry the burden however heavy it is. I have this capacity. I always overcome difficulties."

Robin van Persie said, "We took a big step on the road to the championship. We deserved to win and were better than Beşiktaş. I'm very happy to play 90 minutes. I want to do my best for my team. I'm very content with my physical condition."

Luis Nani has now scored nine times for Fenerbahçe since joining from Manchester United with eight being converted at home. The Portuguese international scored his first home goal since leaving the Premier League giants over the summer. Nani said, "I was not a starter but that's not a problem for me. What's important is my team's winning. I become happy even if I take the field later."
RELATED TOPICS