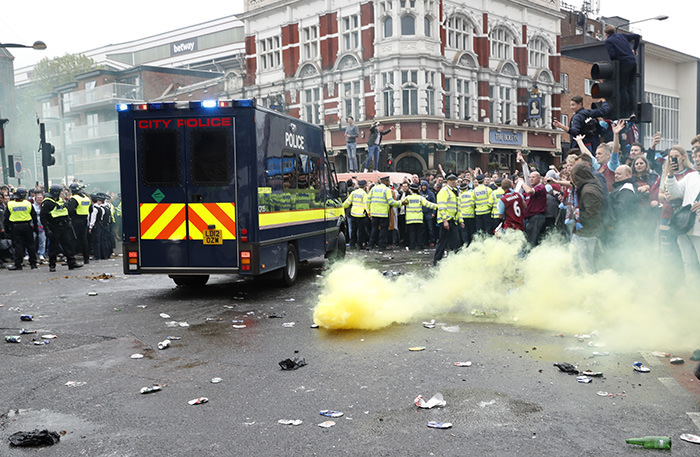 General view of a smoke bomb among police and fans before the match (Reuters Photo)
by May 11, 2016 12:00 am
Fans who soured West Ham United's farewell party by attacking Mancester United's team bus with bottles will be banned for life, vice-chairman Karren Brady said on Wednesday.

What was supposed to be a memorable climax to 112 years at the Boleyn Ground turned ugly before kickoff on Tuesday, and newspaper back pages were dominated by images of United's coach with several windows shattered.

Video footage filmed inside the coach by United's players went viral on social media, while TV footage of the violence was shown around the world.

Co-chairman David Sullivan, speaking to Sky Sports on Tuesday, initially seemed unaware of the seriousness of the incidents and blamed Manchester United for causing a 45-minute delay to game -- the last to be played at the Boleyn.

Brady, however, moved to repair the damage caused by Sullivan's unfortunate remarks.

"I, the Board and everyone at West Ham United totally condemn the unacceptable behaviour we saw outside the ground last night," she said in statement on Twitter.

"Those who chose to behave unacceptably will be dealt with in the strongest way possible, with life bans for those guilty of violence."

Thousands of fans had swarmed the streets around the stadium on Tuesday, many without tickets for the game.

United's coach came under attack as it passed a statue of West Ham's former England captain Bobby Moore, posing with the 1966 World Cup.

One officer from London's Metropolitan Police and a member of the public sustained minor injuries. No arrests were made.

"We have already had thousands of tweets and emails from fans to say how proud they were to be a part of such a special evening in West Ham's history," West Ham said in an earlier statement, before acknowledging the attack on the bus.

"That was not acceptable and we will work with the police to identify those responsible and ban them for life."

The Football Association also announced that it would launch a full investigation, including an incident where objects were thrown at United goalkeeper David de Gea during the game.

West Ham have played at the 35,000-capacity Boleyn Ground since 1904 but will begin next season in the 700 million pounds ($1.01 billion) Olympic Stadium after agreeing a 99-year lease.