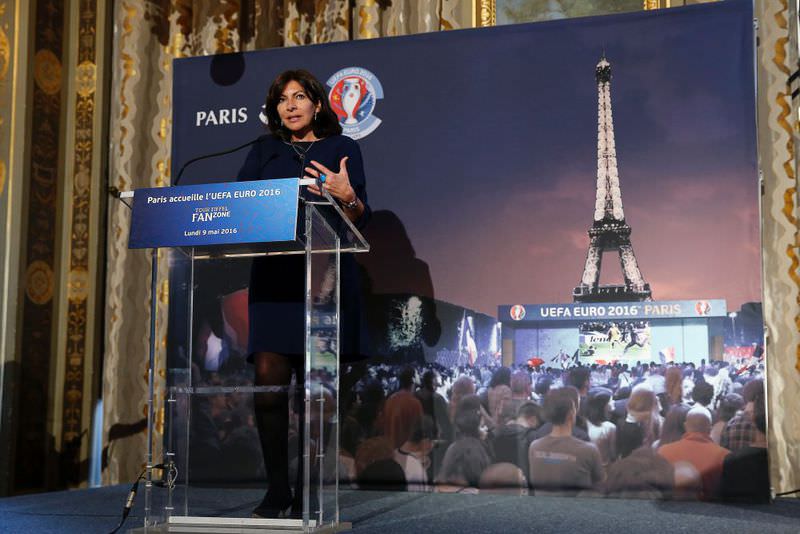 by May 11, 2016 12:00 am
Paris Mayor Anne Hidalgo said Monday the Euro 2016 fan zone in the French capital would be operated under the "highest standards of security" as it prepares to accommodate over 90,000 football supporters.

The Paris fan zone, the largest in France for this summer's European Championships, will be located in an area approximately the size of 30 football pitches close to the Eiffel Tower. "The party has begun," Hidalgo said, with the start of the June 10 to July 10 tournament just over one month away. "The highest standards of security thus far" will be implemented to monitor and protect the site, which will be "completely barricaded" and subject to a "double-access control system." Systematic pat-downs, metal detectors, demining services and video surveillance will form part of the security operation while police will be supported by an additional 400 private security guards deployed around the site.

The government announced last month it was doubling the security budget for fan zones, which are set to welcome up to 8 million supporters in the 10 host cities across France, to 24 million euros ($28 million). France remains in a state of emergency in the wake of the coordinated series of shootings and bombings in Paris in November that killed 130 people in attacks claimed by DAESH. The Paris fan zone will feature eight giant screens and a "new dimension" 420 square meter screen that will be erected in line with the Eiffel Tower. The venue will also be fully equipped with Internet access. The venue will stage concerts on days without matches, with French DJ David Guetta kicking off the festivities on June 9 and British rock band Muse set to play there on June 28.
RELATED TOPICS