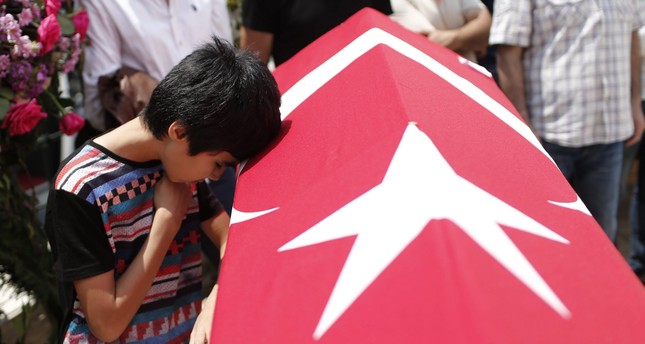 Relatives of Habibullah Sefer, who was killed in the attacks at Ataturk Airport on 28 June, mourn during a funeral in Istanbul, Turkey, 30 June 2016. (EPA Photo)

Football's top governing body in Europe, UEFA took a step back and announced that it would hold a minute of silence for Istanbul Atatürk Airport bombing victims during Poland-Portugal Euro 2016 match on Thursday evening, after refusing to do so the previous day.

UEFA was reported to have changed its decision after Turkish Football Federation President Yıldırım Demirören's initiative.

On Wednesday, the European football's governing body UEFA first refused to hold a minute of silence citing the reason that the attack was not "related directly" to football.

"UEFA says it holds minute's silence when tragedies are 'related to football directly, or to one of the participating teams or host country'" a reporter from Associated Press (AP) had reported.

Users said that Turkey was one of the Euro 2016 competitors, and it would be a better idea to pay respects and offer condolences to the country and victims' families.

UEFA said last year that all teams playing in European internationals would wear black armbands, with a minute's silence held before kickoff in honor of the victims of the Paris attacks.

"UEFA wishes to express its support and solidarity to France and to those affected by these horrible acts," the organization had said in a separate statement after attacks around Paris, including outside the Stade de France where France was playing Germany in a friendly.

At least 44 people were killed, more than 200 injured following a triple suicide bombing and gun attack at Istanbul's main Atatürk airport on Tuesday, in the latest deadly strike to rock Turkey's most populated city, which had many similarities with the deadly attacks carried out in Brussels in March.

Turkish Interior Minister Efkan Ala said on Thursday there are 19 foreign nationals among the dead.

The foreigners mostly hail from Arab and Central Asian nations and Afghanistan, and at least 23 Turks died. Most of those killed were Muslims.

Share on Facebook Share on Twitter
Previous in Football Football's top governing body in the Europe, UEFA refused on Wednesday... Next in Football A tribute was paid to the victims of Tuesday's terror attack in Turkey...
DAILY SABAH RECOMMENDS