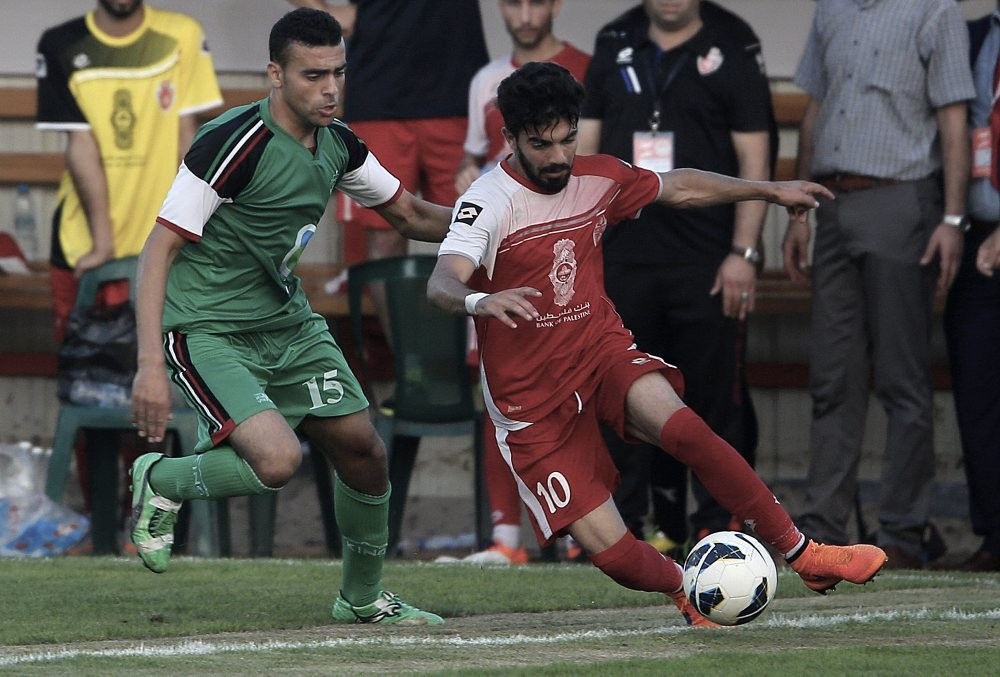 Palestinian Ahli al-Khalil player Fadi Zeidan (R) and Itihad Al-Shejaeiya player Mustafa Hasaballah (L) fight for the ball during a football match between the Ahli al-Khalil and Itihad Al-Shejaeiya in Al Yarmouk stadium in Gaza City.
by Anadolu Agency Aug 02, 2016 12:00 am
The Israeli authorities on Monday agreed to allow seven players from Palestinian football club Shabab Khan Younis to travel from the blockaded Gaza Strip to the Israeli-occupied West Bank to participate in the final match of the Palestine Cup, in which they and their teammates will face off against Hebron-based team Ahly al-Khalil.

"After contacts [between] the Palestinian Football Association (PFA) and the International Federation of Football Associations (FIFA), the Israeli authorities agreed to give travel permits to seven Gazan players through the Erez Crossing to join their colleagues who left Gaza last Wednesday," PFA press officer Mustafa Siyam told Anadolu Agency.

"If the seven players arrive early, the final match will be played this evening," he said.

"If not, it will be held on Tuesday," he added.

PFA chief Jibril Rajoub said earlier that the second leg of the Palestine Cup finals, initially slated for last Saturday, would be postponed by 48 hours due to Israeli restrictions on the Gazan footballers' movement.

Palestinian movement between the West Bank and Gaza requires prior approval by the Israeli authorities, who generally only grant permits to medical patients, merchants and foreigners.

During a weeks-long military offensive against the Gaza Strip in 2014, Israel struck several sports facilities in the coastal enclave.

Since 2007, the Gaza Strip has groaned under a joint Israeli/Egyptian blockade that has deprived its roughly 1.9 million inhabitants of basic commodities, including food, fuel, medicine and building materials.
RELATED TOPICS