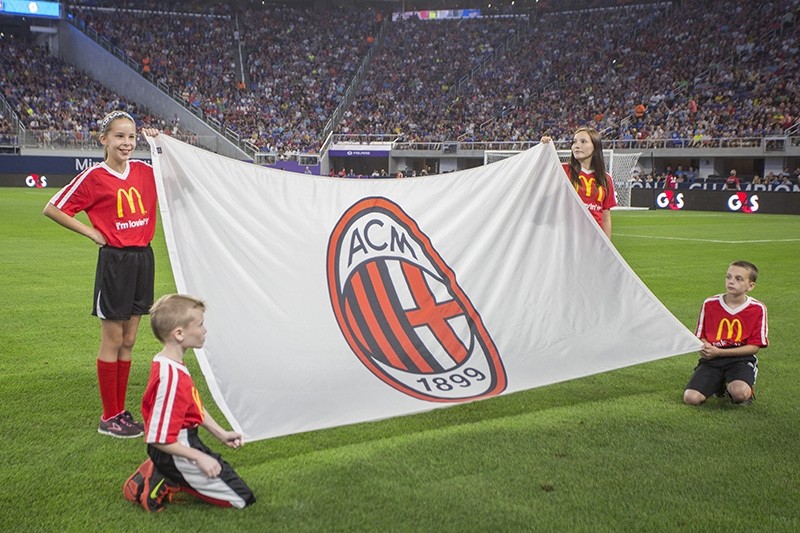 Kids hold up an AC Milan flag ahead of the International Champions Cup soccer match between AC Milan and Chelsea FC on Wednesday, Aug. 3, 2016, in Minneapolis. (AP Photo)
by Compiled from Wire Services Aug 05, 2016 12:00 am

Berlusconi's Fininvest investment arm said Friday that the deal with a Chinese investment group values the club at 740 million euros (around $820 million) and requires the investors to spend 350 million euros over three years on improvements.

Berlusconi owns 99.93 percent of the club, which has been European champion seven times.

Fininvest said Berlusconi's goal in negotiating the sale was "to provide AC Milan, through an appropriate ownership structure, with greater financial resources now more essential for competing with the top football clubs of the world."

More unnamed Chinese buyers were expected to get on board later.

"Other investors will acquire shares of AC Milan, some of which are State-controlled entities. Among those investors are companies active in the financial industry and others in industrial sectors," Fininvest said.

Chinese and Italian authorites must now rubberstamp the deal scheduled for completion before the end of 2016.

The deal was signed by Danilo Pellegrino, the Fininvest CEO, and Han Li, a representative of the Chinese investors.

"Throughout the negotiations Fininvest has maintained its position established by Mr Berlusconi to provide AC Milan with a structure from which it can compete with the world's top clubs," Pellegrino said.

The sale represents the end of an era for Berlusconi, who bought the rossoneri in February 1986 and made them one of the top teams in Europe. Under his helm, AC Milan won eight Italian league titles and five Champions Leagues.

When he entered politics in 1994, one of Berlusconi's campaign slogans was that he could make Italy as successful as his football team. But in recent years, the man's star faded, in public life as well as in sport.

Berlusconi was kicked out of parliament in 2011 following a tax fraud conviction. That was also the year AC Milan last won a Scudetto. In the last Serie A season, they finished in seventh place, failing to qualify for any European tournaments.

Leaving hospital a month ago after a heart operation, Berlusconi said he had no more energy to dedicate to the club, and said he would sell to buyers committed to reviving AC Milan's glory "in Italy, Europe and the world."

The 79-year-old media mogul turned politician, who is increasingly thinking about legacy issues, said he would ask the Chinese who had expressed interest in the club to invest "at least 400 million euros in the next two years."

In the end, buyers agreed to pay a 100-million-euro deposit, and inject 350 million euros over the next three years, including 100 million at the closing of the sale agreement, expected by the end of 2016, Fininvest said.

The deal is the latest in a series of inroads made by China in English football.

Second-tier clubs Aston Villa and Wolverhampton Wanderers -- both of whom play in the same Midlands region as West Brom -- were taken over by Chinese investors in recent weeks.