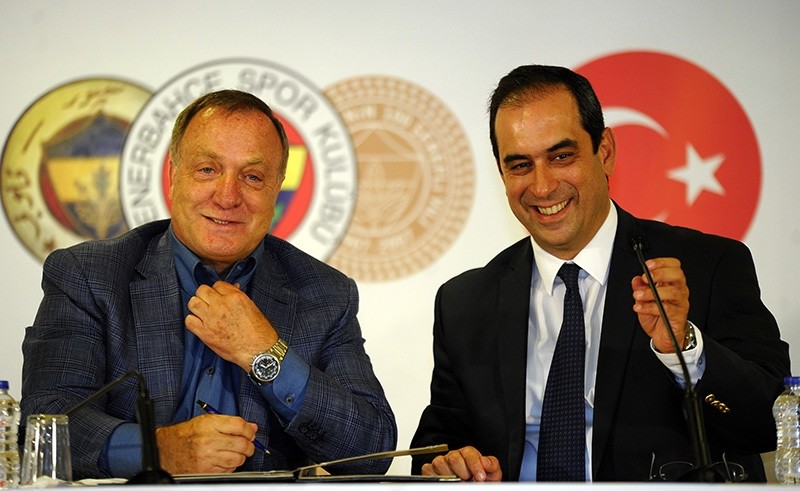 Experienced Dutch coach Dick Advocaat on Wednesday vowed to reinvigorate the fortunes of Fenerbahçe with attacking football as he was officially unveiled as the new coach of the Istanbul giants.

68-year-old Advocaat had arrived in Istanbul earlier this week as the surprise choice to replace Vitor Pereira, whose one-year stint ended in an acrimonious parting with the club unilaterally terminating the contract of the Portuguese coach.

"The most important thing is that we try to take the initiative in the game," said Advocaat as he was introduced at the signing ceremony at Fenerbahçe's Şükrü Saraçoğlu Stadium.

"We have to play attacking football. It's simple. And to be successful everyone in the squad has to be involved in what we do."

Fenerbahçe will begin the 2016-17 season on Sunday against Istanbul Başakşehir.

In a colorful managerial career spanning over three decades, Advocaat had most recently managed clubs including Zenit St Petersburg and Sunderland.

The former Dutch national coach also enjoyed a successful stint of over three years with Scottish giants Rangers from 1998-2001.

Fenerbahçe lost out to local rivals Beşiktaş in the race for the league title last season but the final nail for Pereira was the team's defeat at the hands of Monaco in the third qualifying round of the Champions League earlier this month.

Turkish media have seen Advocaat's arrival as a major boost for his fellow Dutchman and star striker Robin van Persie, who had notoriously poor relations with Pereira.

But Advocaat insisted there would be no special treatment for the ex-Manchester United marksman.

"It is not about one player, it is about the team. The most important thing is the score and not the individual. So I can't promise you anything."

Advocaat's first test comes as soon as Thursday when Fenerbahçe take on Grasshoppers Zurich in the first leg of the Europa League play-offs.

His arrival means that two of Istanbul's top three clubs are managed by Dutchmen, with Jan Olde Riekerink at the helm of rivals Galatasaray.