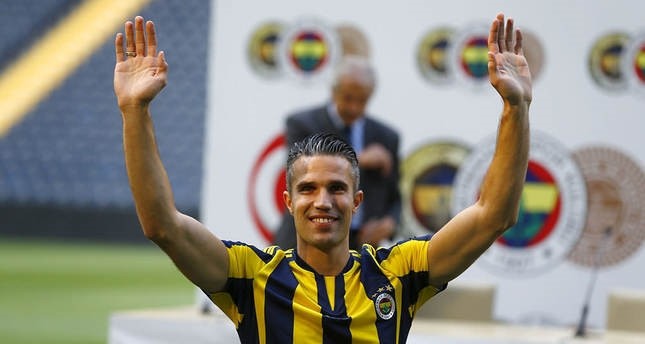 Robin Van Persie
by Hakan Baş Aug 18, 2016 12:00 am
Fenerbahçe will Thursday play against Swiss rivals Grasshoppers in Istanbul in the UEFA Europa League playoff first leg. Their new coach Dick Advocaat, who has won league titles with PSV Eindhoven, Rangers and Zenit St Petersburg in a coaching career spanning 36 years, does not have long to prepare for his first game. However, it is expected that Advocaat will have his squad play with 4-2-3-1 system instead of his predecessor Vitor Pereira's 4-4-2. Volkan Şen and Alper Potuk will have to miss the match because they are suspended. The Turkish team will look to get the edge on their Swiss rivals in the home leg. Fenerbahçe's experienced goalie Volkan Demirel will play for the first time in 100 days. He was unable to play before due to a herniated disk surgery.

Fenerbahçe have moved swiftly following the departure of Vítor Pereira, naming the experienced Advocaat as the man who will coach them in 2016/17. He has spent the last three months working as an assistant to Netherlands boss Danny Blind, with a return to club management looking unlikely. The prospect of leading Fenerbahçe, though, has proved too good to refuse.

Vitor Pereira guided Fenerbahçe to the runners-up spot in the league and cup in his only season in Istanbul. His team earned a UEFA Champions League third qualifying round berth but let slip a 2-1 first-leg advantage against Monaco on Aug. 3.
RELATED TOPICS