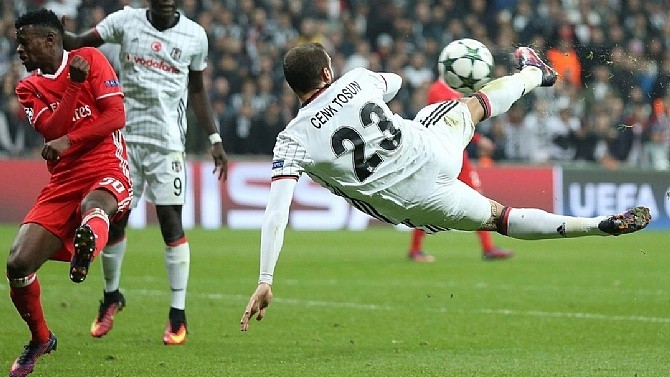 Beu015fiktau015f striker Cenk Tosunu2019s incredible volley was chosen the finest goal of the group stage by UEFA. He scored an early contender for UEFA Champions League goal of the season during his teamu2019s 3-3 draw with Benfica.
by Daily Sabah Feb 08, 2017 12:00 am

UEFA.com delved into the record books to unearth six of the greatest UEFA Champions League comebacks. Beşiktaş's comeback against Benfica from 3-0 to draw 3-3, last year, was ranked sixth. The number one spot went to Liverpool's 2005 Champions League final victory against Milan in Istanbul

As the New England Patriots made history by staging one of sports' greatest ever comebacks to beat Atlanta Falcons in this year's Super Bowl, it inspired UEFA to dive into its record books to come up with a list of the six best comebacks in the competition's history. Unsurprisingly, first place went to an iconic championship matchup, which took place at the Atatürk Stadium in Istanbul on May 25, 2005, between Liverpool and Milan; rightfully named the "Miracle of Istanbul."

Trailing 3-0 at the break, Rafael Benitez's Liverpool stormed back in the second half with three goals in seven minutes to set up a dramatic shoot-out triumph. Andriy Shevchenko, the author of Milan's winning penalty kick in the 2003 final against Juventus, was this time denied by Jerzy Dudek to give Liverpool a remarkable victory.

In that spirit, here are some other remarkable comebacks in the UEFA Champions League history.

For the second straight group match Otto Rehhagel's Werder Bremen found themselves 3-0 down, but if their fightback had come up short a fortnight earlier in a 3-2 loss to Porto, there was no stopping them this time around. Incredibly they would not score their first goal until the 66th minute, through Wynton Rufer, yet when the New Zealander netted again 23 minutes later it was to complete a brilliant fightback.

"For the first five or six minutes of half-time I just let the players sit in silence," recalled Javier Irureta after his team traipsed in trailing 2-0. The Deportivo coach's medicine did not work immediately, Laurent Leroy soon made it three, but the players eventually got the message. A furious spell of attacking football brought four goals in 27 minutes, including a hat-trick of headers by substitute Walter Pandiani.

"I told the players it's better to lose 5-2 than not try to change something," he reasoned.

Goals from Jan Kozak and Balazs Borbely to bring the team storming back were his rewards.

Even the Belgian side was left struggling to come up with an explanation after they staged the most unlikely of comebacks in north London. The writing appeared to be on the wall when Alex Oxlade-Chamberlain opened up a 3-0 lead just before the hour, yet two Anthony Vanden Borre strikes and a last-minute equalizer by Aleksandar Mitrovic earned the Brussels club a point.

The Portuguese team were up 3-0 and coasting with almost an hour gone in this group fixture. Then came Beşiktaş, starting with half-time substitute Cenk Tosun netting the first goal. Yet, as the game entered its final ten minutes, Benfica still seemed to have done enough. However, Ricardo Quaresma pulled another one back from the spot and, with 60 seconds of normal time remaining, Vincent Aboubakar dramatically leveled.
RELATED TOPICS