Desperate Fener out for win to stay in title race 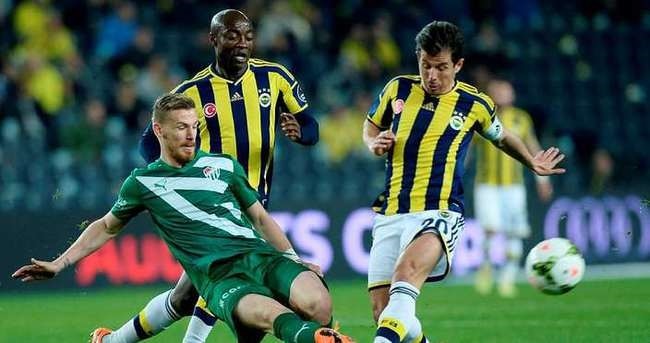 With the Spor Toto Super League set for week 20 action, Fenerbahçe are desperately looking to claim three points against Bursaspor if they want to close the gap

With the top three teams of the Turkish Super League all primed for a fierce battle for the title, fourth-placed Fenerbahçe will be in search of three points when they face Bursaspor in their game week 20 bout on Saturday. The Yellow Canaries desperately need a win in order to close a nine-point gap with league-leaders Beşiktaş, who are firmly on top with 44 points. Beşiktaş, however, were also looking to extend their lead on Friday as they took on Kardemir Karabükspor. On Saturday, Fenerbahçe will be hosted by their Anatolian rivals Bursaspor. This will be the 96th face-off between the two teams and hosts Bursaspor will be yearning to break their four-week winless streak with a victory. History, however, is on Fenerbahçe's side, having won 48 times in the 95 matches played between the two sides so far, compared to Bursaspor's 14 wins, with the remaining 33 matches ending in a draw.

A positive for Bursaspor on the other hand was that they have not conceded any goals against Fenerbahçe in their last two matches. The Green and Whites won one of those matches and drew the other, while their Argentine star Pablo Batalla scored a goal in both matches.

In the meantime, second-placed Medipol Başakşehirspor wants to continue its surprise campaign this season as they seek to walk away with three points against city rivals Kasımpaşaspor on Sunday. Coming into the match are huge implications for Medipol Başakşehirspor, who with a win, may regain the top spot.

Another anticipated matchup on Sunday will see Turkish powerhouse's Galatasaray host Kayserispor. In third place with 39 points, Galatasaray will also look to close the gap with Beşiktaş and Başakşehirspor. Galatasaray Vice President Mehmet Çakmak Uyar said, "We take on every match with a will to win. We don't have any injury or suspension issues except Douglas. For us, every team is equal. We only want to win each and every match." Meanwhile, Trabzonspor, who hold six league titles, will travel to Ankara to face Osmanlıspor on Saturday.

The team from Turkey's Black Sea region had been putting on below-par performances up until the recent weeks, as they won three consecutive matches, beating Bursaspor 2-1, Kasımpaşa 1-0 and Gaziantepspor 4-0. They are now aiming to continue the winning streak against Osmanlıspor. A win would mean that after almost 176 weeks in the league the team will register four consecutive wins. Trabzonspor will be without Ramil Sheidaev, who they have loaned out to Slovakian club Zilina. Elsewhere, fifth-placed Antalyaspor will be hosting Atiker Konyaspor. Antalyaspor have 31 points from 19 games while their seventh-placed Anatolian rivals have 27 points from the same outings.

Ahead of the match, Antalyaspor Caoch Rıza Çalımbay said, "I am very lucky to have a star player like Samuel Eto'o on the squad. He is not just a player he is also my assistant on the field. He motivates the other players very well. Sometimes team captains do what many coaches cannot do in matches. It is usually difficult to work with world famous stars. However, I had a conversation with Eto'o, when I took this job and he said that he only wanted to serve the team."In other matches, Aytemiz Alanyaspor will take on Gençlerbirliği on Saturday, while Akhisar Belediyespor will host Çaykur Rizespor, and Gaziantepspor will face-off with Adanaspor on Monday.
RELATED TOPICS