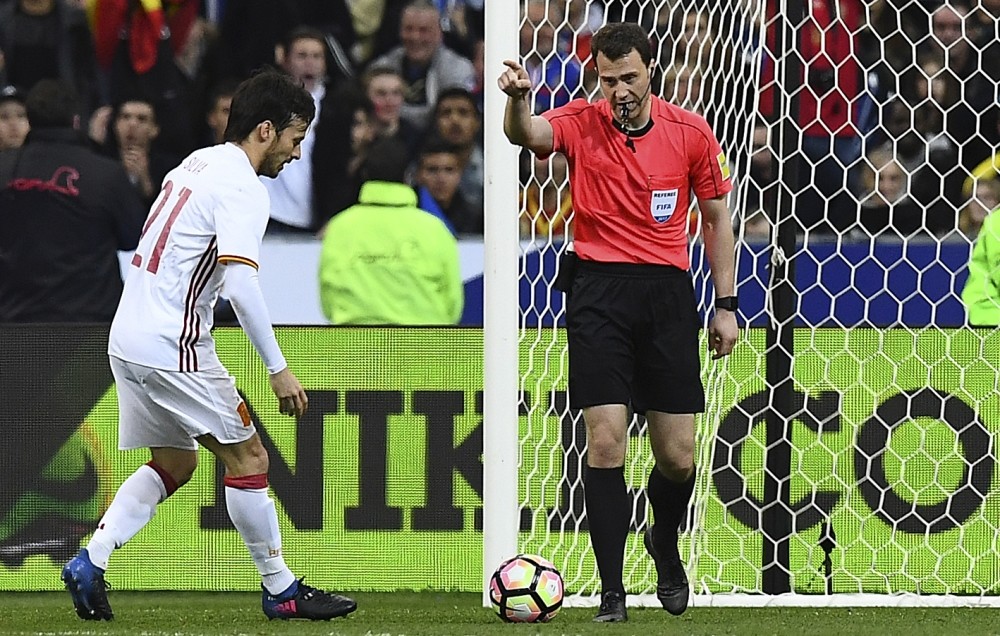 As soccer's lawmaking body forges ahead on how best to implement key rule changes through the use of video referees, European powerhouse Spain fears being left behind through a lack of domestic cooperation.

David Elleray, the technical director of the International Football Association Board (IFAB), said video assistant referees could help bring modifications to the handball rule to make the game fairer with the introduction of penalty goals being mooted.

The former referee said incidents like Luis Suarez's handball on the line during Uruguay's 2010 World Cup tie against Ghana was discussed. The African side missed the resulting penalty and a chance to advance to the semi-finals.

"The IFAB is looking at 25 areas of the game aiming to make it fairer and handball is one of those," the 62-year-old Briton told the Times on Thursday.

"One of those areas we are discussing is incidents similar to the handball by Luis Suárez in the 2010 World Cup. A lot of people have said in those kind of incidents 'why can't you give that as a goal if it is clearly going in?'."

Video assistance, which is being tested ahead of the 2018 World Cup, played a key role earlier this week when it led to a disallowed goal from France striker Antoine Griezmann for offside in a friendly against Spain.

However, La Liga president Javier Tebas said the benefactors of that decision were far behind other countries in implementing video technology due to insufficient assistance from Angel Maria Villar, the president of the national soccer federation (RFEF).

"We've been working with FIFA on the matter and the Federation haven't come to a single meeting," Tebas was quoted as saying in Thursday's edition of Spanish daily Marca.

"The fact we aren't working on it now is damaging our league, as we need to train our referees, get our stadiums ready."

The Spanish top flight is the only one of Europe's leading five leagues not to utilise goal-line technology. The issue came under the spotlight in January when Barcelona drew 1-1 at Real Betis after failing to have a goal awarded when the ball had clearly crossed the line.

Tebas said at the time that goal-line technology was too expensive to be implemented in Spain but added that he was in favour of a video assistant referee, which he said would be in operation in Spain by July 2018.