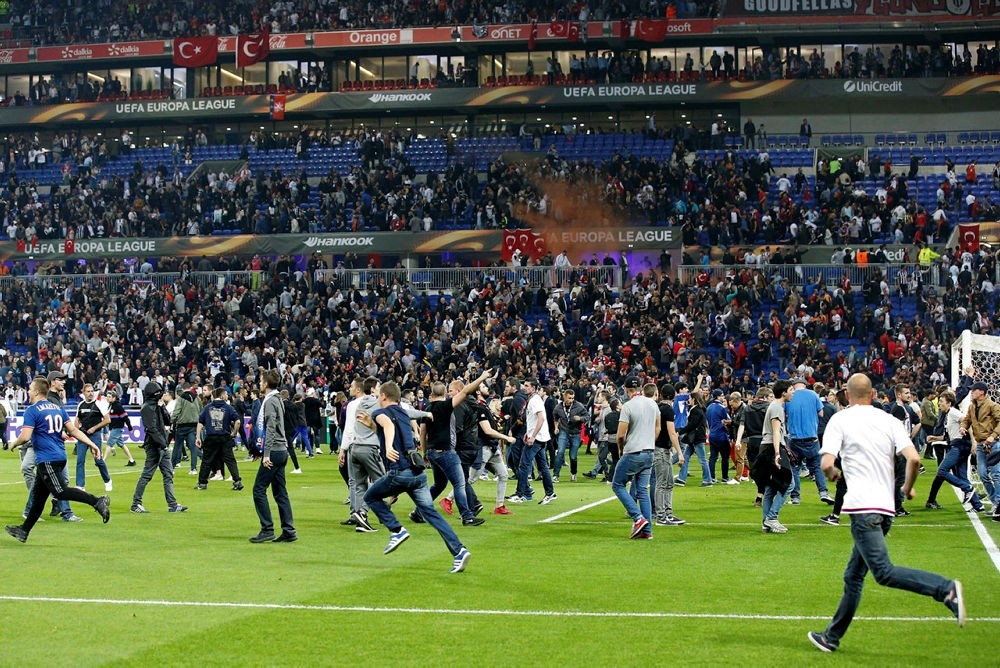 European football governing body UEFA has charged Turkey's Beşiktaş and France's Lyon over Thursday's violence-marred European tie as both clubs blamed opposing fans for instigating much of the trouble.

Beşiktaş were charged with throwing projectiles and crowd disturbances while the hosting team Lyon were hit with four charges, including the setting-off of fireworks, blocking stairways, insufficient organization and a pitch invasion.

UEFA has yet to set a date for a hearing to determine the necessary punishments.

On a volatile night in Lyon, fighting French and Turkish fans delayed a Europa League quarterfinal kickoff by 45 minutes on Thursday. Crowd trouble turned into a crisis after accusations made by Olympique Lyon President Jean Michel Aulas.

Putting responsibility on the Beşiktaş fans, Aulas said after the match, "I hope UEFA will take measures before the return match in Istanbul. To me, it would be fairer that the return match is played behind closed doors. Honestly I fear for our players' safety.

"It is interesting that such incidents happen in one of the safest stadiums in Europe. It appears to me that Beşiktaş sold tickets to those who do not have the right to enter the stadium. Several fans got hurt."

Beşiktaş coach Şenol Güneş refuted Aulas' allegations saying, "If the French president thinks so, he is wrong. The incidents happened in Lyon not in Istanbul. The statements by Aulas only increases the tension and ill-feeling. We cannot get anywhere by accusing each other. The biggest mistake made was that the officials did not take enough measures in the stands. The Lyon president is trying to exploit the incidents."