Lyon call for return match to be played behind closed doors 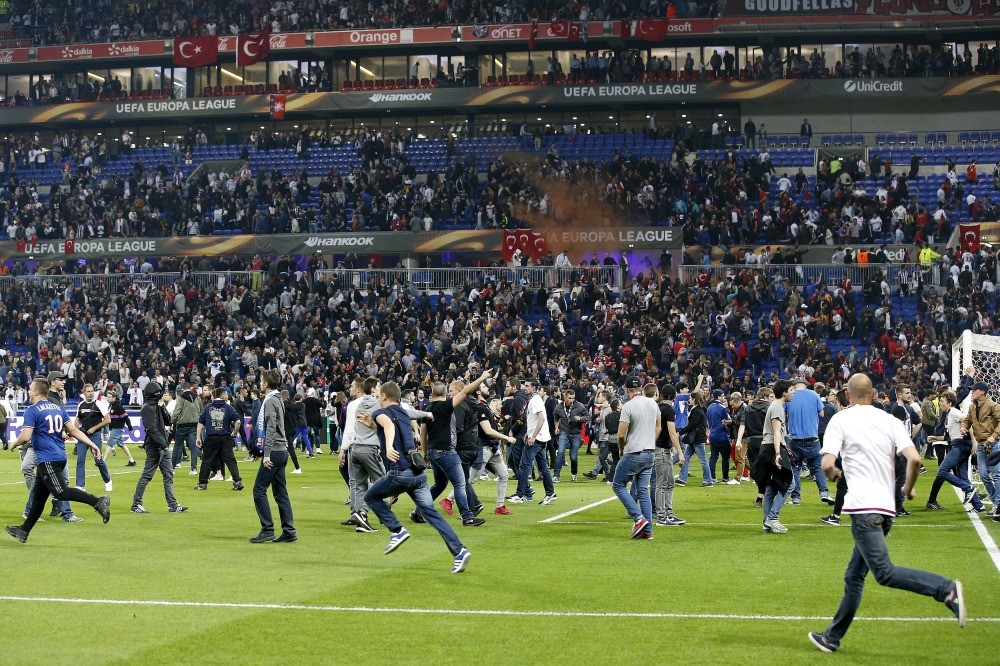 The president of the French team, which came from behind to beat Beşiktaş 2-1 in a Europa League quarter-final first leg clash, accused Beşiktaş fans of crowd trouble and called for the return match in Istanbul to be played behind closed doors. The Beşiktaş coach said, ‘This statement would only increase tension'

On a volatile night in Lyon, fighting French and Turkish fans delayed a Europa League quarterfinal kickoff by 45 minutes on Thursday. Crowd trouble is turning into a crisis after accusations made by Olympique Lyon President Jean Michel Aulas. Putting responsibility on the Beşiktaş fans, Aulas said after the match, "I hope UEFA will take measures before the return match in Istanbul. To me, it would be fairer that the return match is be played behind closed doors. Honestly I fear for our players' safety.

"It is interesting that such incidents happen in one of the safest stadiums in Europe. It appears to me that Beşiktaş sold tickets to those who do not have the right to enter the stadium. Several fans got hurt."

On next week's scheduled second leg he added: "I don't know what needs to be done, play behind closed doors or elsewhere but it will be too dangerous for us to play this match with the same fans that were here tonight."

Beşiktaş coach Şenol Güneş refuted Aulas' allegations saying, "If the French president thinks so, he thinks wrong. The incidents happened in Lyon not in Istanbul. The statements by Aulas only increases the tension and ill-feeling. We cannot get anywhere by accusing each other. The biggest mistake made was that the officials did not take enough measures in the stands. The Lyon president is trying to exploit the incidents."

France's most prominent sports daily L'Equipe denied Aulas' allegations writing, "Those who provoked the incidents were Lyon fans. The incidents started outside the stadium and continued inside it. Lyon fans attacked Beşiktaş fans first. Then Beşiktaş fans clashed with police."

The game kicked off 45 minutes late after fans clashed in the stands and fireworks and other projectiles were thrown by fans toward each other. Authorities had categorised the match as maximum risk with 1,000 stewards drafted in for the encounter held in an area of France's third city which is home to many people of Armenian origin.

Police reported the arrest of a dozen Lyon and Beşiktaş fans with five police officers and two supporters suffering minor injuries after fighting broke out at Lyon's Parc O L.

Meanwhile, Beşiktas should not be penalized over crowd trouble, the Turkish football club said Friday. "The first priority of the home team is to provide a game played in secure and healthy conditions," Beşiktaş spokesman Metin Albayrak told Anadolu Agency.

"Everything… is under the responsibility of Lyon. There is no need to punish Beşiktaş."

"If there is one who would be punished, it is Lyon, not Beşiktaş."

Albayrak said Beşiktaş had notified UEFA before the game that tickets were being sold illicitly.

"If a twentieth of the incidents were carried out in Turkey, Turkish clubs would be heavily punished," Albayrak added. "Such incidents do not happen in Turkey... I am proud of my fans."

Photographs on social media showed black-clad Lyon hooligans, who have a history of violence and neo-Nazi sympathies, attacking a group of Turkish fans that included women and children.

Albayrak said the French fans would be welcomed with Turkish hospitality at the return match on April 20 in Istanbul.
RELATED TOPICS