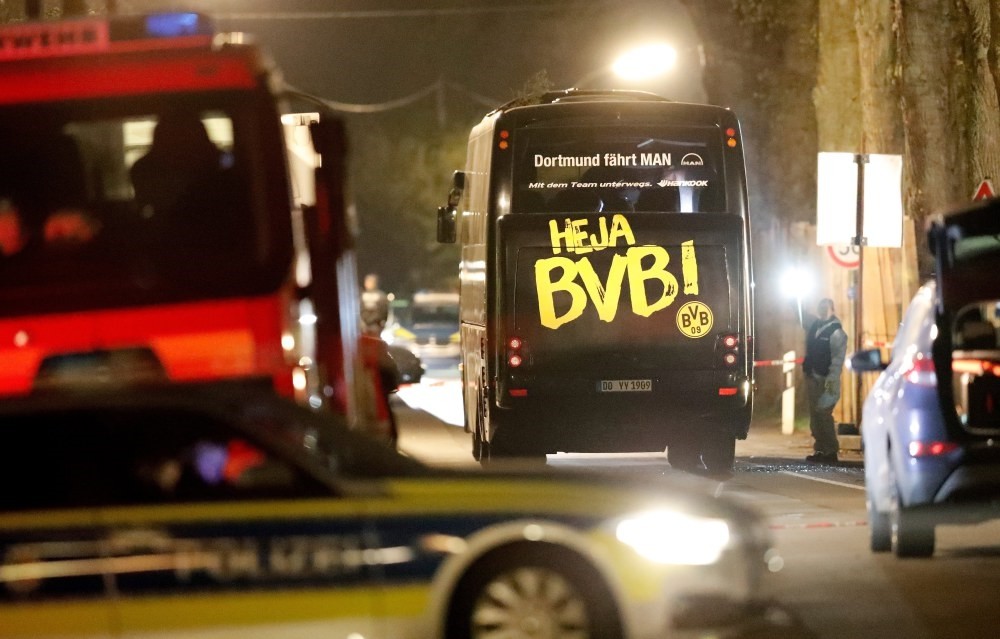 The team bus of German club Borussia Dortmund is seen surrounded by police and emergency vehicles on a street after it was hit by three explosions in Dortmund on April 1.
by Associated Press Apr 22, 2017 12:00 am

A 28-year-old German-Russian citizen was arrested Friday in Germany on suspicion of bombing the bus carrying the Borussia Dortmund team in an attack last week that officials alleged was motivated by financial greed. A Dortmund player and a policeman were injured in the triple blasts last week as the bus was heading to the team's stadium for a Champions League match against AS Monaco. Investigators found notes at the scene claiming responsibility on behalf of the DAESH, but quickly doubted their authenticity.

Federal prosecutors said the suspect, identified only as Sergej W. in keeping with German privacy law, was arrested by a police tactical response team early Friday in or near the southwestern city of Tuebingen. The man faces charges of attempted murder, causing an explosion and serious bodily harm.

Prosecutors said they planned to make a statement later Friday, but revealed that the suspect had taken out a loan and bought a large number of so-called put options for shares of Borussia Dortmund, betting on a drop in the share price."A significant share price drop could have been expected if a player had been seriously injured or even killed as a result of the attack," they said. Ralf Jaeger, the top security official in North Rhine-Westphalia state, said the suspect had hoped to earn millions

"The man appears to have wanted to commit murder out of greed," said Jaeger.

Prosecutors said they were able to trace the computer used to purchase the put options to the luxury hotel in Dortmund where the team had been staying. They said W. had also booked a room there and placed three explosives, packed with shrapnel, along the route the bus would take to reach the stadium.