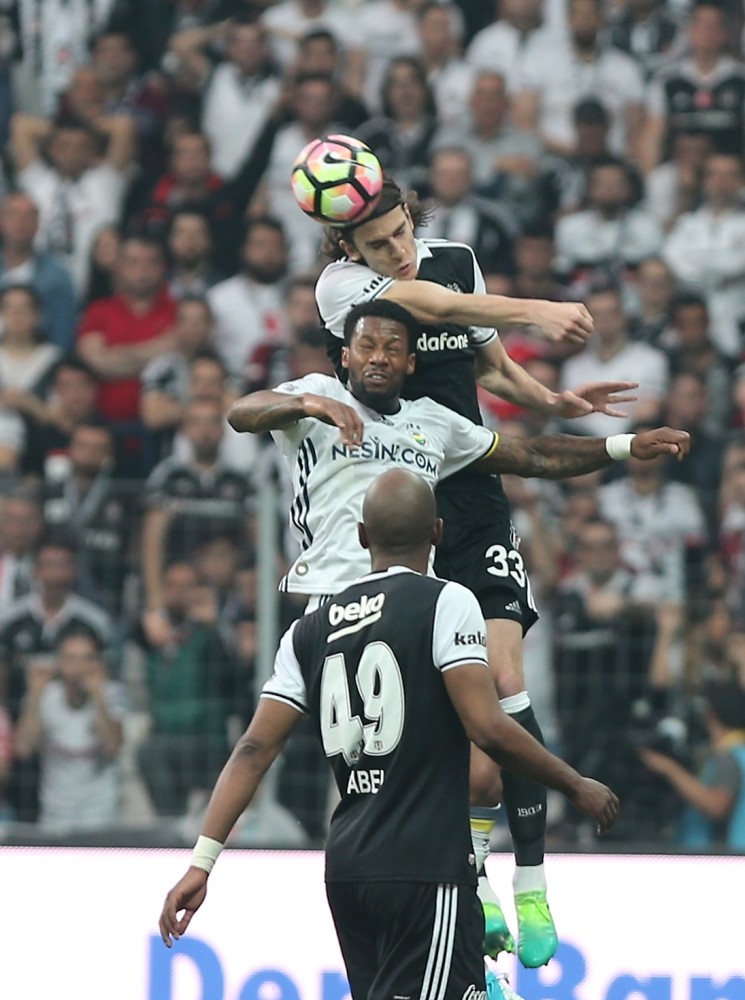 With just four weeks remaining, Fenerbahçe blew the Spor Toto Super League title race wide open on Sunday as they held league leaders Beşiktaş to a 1-1 stalemate. The Black Eagles, with 40,000 home fans behind them, used their home-field advantage to mount pressure on Fenerbahçe in the first half. They were awarded a goal when striker Vincent Aboubakar tapped in a cross from winger Ricardo Quaresma to make it 1-0 just before the halftime whistle in the 45th minute. Aboubakar's goal was the first one Fenerbahçe goalkeeper Volkan Demirel conceded in the last 10 derby matches. The second half saw more missed opportunities for Beşiktaş.

Quaresma failed to make it 2-0 after he was denied by the post. Close to the end of full-time, things looked bleak for Fenerbahçe after defender Martin Skrtel was sent off for a second bookable offense in the 88th minute. Just two minutes later, midfielder Josef de Souza joined his teammate with a second yellow card. Unfortunately for Beşiktaş, a miscommunication in their defense gifted the nine-man Fenerbahçe with a goal in the dying minutes of the match. Beşiktaş defender Marcelo and goalkeeper Fabricio both tried to clear an incoming ball, when Marcelo accidentally headed it backwards into his own net.

The draw took Fenerbahçe's points to 57, keeping them in the title race, mathematically.

Though Beşiktaş raised their tally to 65, their lead was cut down to just two points as second placed Medipol Basakşehir had beat Antalyaspor 1-0 on Friday. Tensions were high on the pitch and it carried over after the match ended. Demirel accused Beşiktaş's midfielder Anderson Talisca of making inappropriate gestures.

"After we fought against each other for the ball in a possession, I apologized to him and he responded with an inappropriate gesture. I tried to inform the referee, but he did not care. If Talisca was shown a red card, we could have won the match. We would have had a chance for the title in the remaining four weeks," he said.

Meanwhile, Beşiktaş coach Şenol Güneş said, "The match should not have ended with this result. But, this is football. We deserved to win but were unlucky. The goal we conceded was due to a very simple mistake. But we will never give up. We can win the last four matches."

"I don't think Fenerbahçe will be able to qualify for next season's Champions League. They just tripped us up like their goalie said. The score did not do any good for us or them. Fenerbahçe's aim was to make things worse for us and they were successful," Güneş added.

"We did a good job for Başakşehir. We found the goal in the last minute with a little luck. However, our rivals were luckier than we were in quite a few matches this season," the Fenerbahçe coach said.

"I am not happy with our performance against Beşiktaş," he added.

Regarding fan support, Advocaat said, "We saw how important it can be during this match. I hope our fans saw that too."

Elsewhere, Galatasaray's loss to Kasımpasa on Saturday ended any hopes for a title shot. The Lions are currently fourth on the table with 52 points.