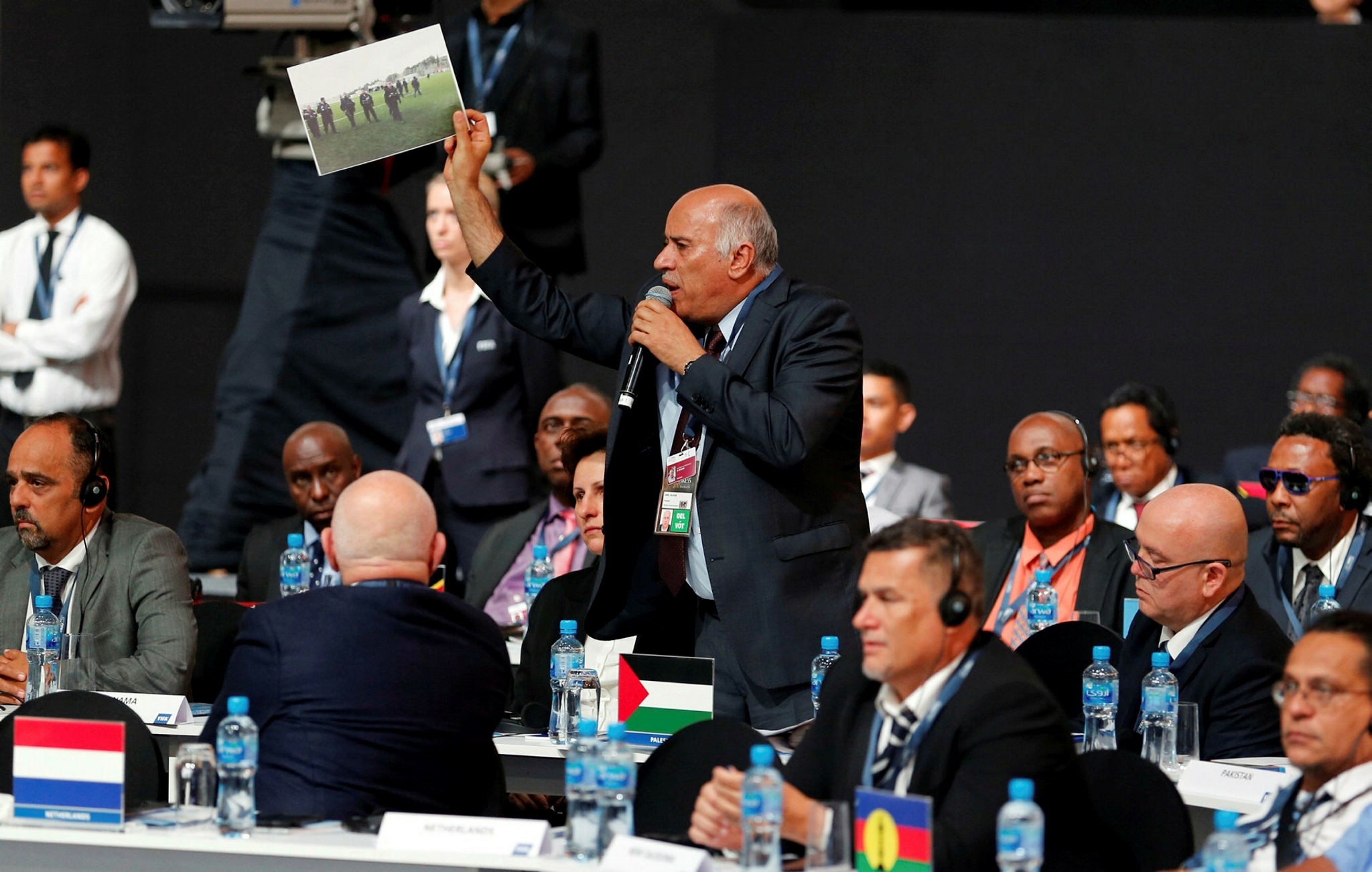 Palestinian Football Association (PFA) President Jibril Rajoub shows a photo mentioning Israeli soldiers on soccer ground in Palestine, at the 67th FIFA Congress in Manama, Bahrain May 11, 2017. (Reuters Photo)
by Daily Sabah with AP May 11, 2017 12:00 am

Israeli and Palestinian soccer leaders clashed verbally on Thursday as a resolution to their dispute over the presence of Israeli teams in the occupied West Bank stalled again at the FIFA Congress.

A motion to delay a ruling on the dispute was passed by the Congress, effectively postponing any decision on the matter until 2018.

The Palestine Football Association claims the presence of Israeli teams in the settlements breaks FIFA rules that bar a federation from holding games on another member's territory without permission.

"It can't be that the decision is postponed again," Jibril Rajoub, the head of the Palestinian federation, said. "That is illegal."

Israel has rejected the Palestinian campaign as an attempt to politicize sports, and has cited security concerns as the reason behind the occasional restrictions placed on Palestinian players, particularly in the Hamas-ruled Gaza Strip.

"FIFA should not be involved in political issues," said Efraim Barak, legal adviser to Israel's Football Association. "A political issue that was not solved between Israel and the Palestinians for decades will not be solved by football federations in two years, that's plain logic."

Rajoub embraced Israel's willingness to play a match between their teams.

"I have no problem to use football as a bridge but first of all treat me as a partner, as a neighbor, let us pave the road for that," Rajoub said.

The Palestinians want the Israeli-occupied West Bank as part of their future state, along with the Gaza Strip and east Jerusalem. The international community overwhelmingly opposes the settlements as illegal or illegitimate obstacles to peace.

The Palestinians have for years made a series of soccer-related complaints against Israel over travel delays for Palestinian players caused by Israeli security restrictions. Their claim is based on a U.N. General Assembly vote that gave Palestine non-member state status at the United Nations and recognized the West Bank as Palestinian land.