Football lawmakers set to give go-ahead to video assistant referees 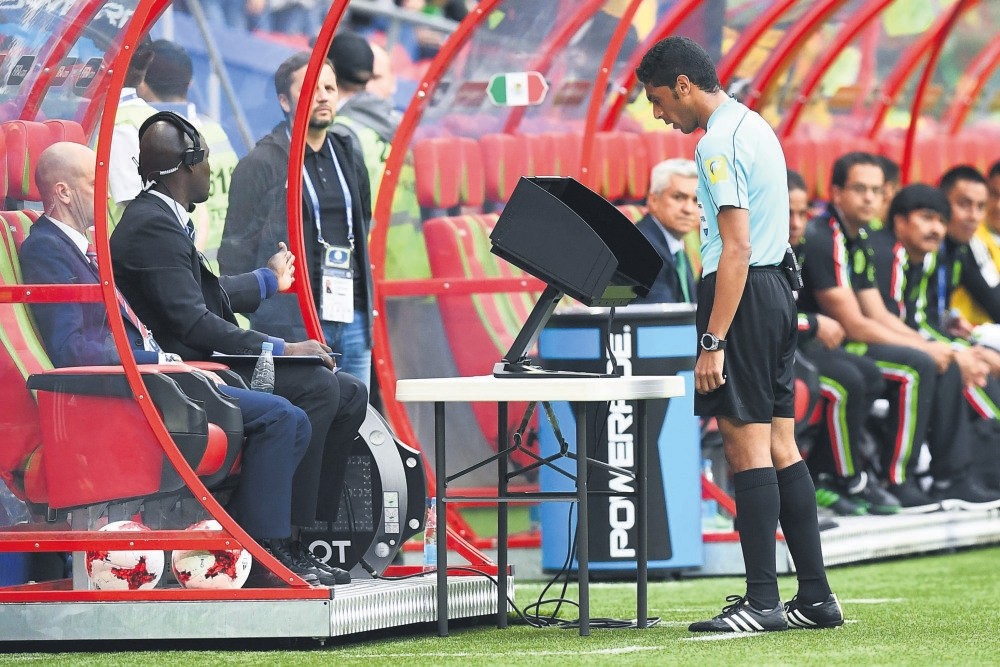 The assistant referee check the video playback during the 2017 Confederations Cup group A football match between Mexico and Russia at the Kazan Arena Stadium.
by Mar 03, 2018 12:00 am

The International Football Association Board meets in Zurich today to decide whether to give the green light to the video assistant review system after trials had mixed results, but the FIFA president wants to use it in this year's World Cup

The video assistant referee system (VAR) was meant to clear up controversy in football, checking if goals were offside or red cards and penalties had been missed by the officials. Instead, the system has caused even more controversy during its trial in Germany, England and Italy. But the International Football Association Board (IFAB) is widely expected to approve its future use at a meeting Saturday. FIFA President Gianni Infantino is very much in favor of the system and wants to introduce it at the World Cup in Russia this year.

"I have to admit that two years ago I was skeptical concerning the use of the VAR. Today I'm convinced that it will be a good thing for football," he said last month.

"In 2018 we cannot afford that everyone in the stadium and everyone in front of a TV screen can see within a few minutes on his phone whether the referee has made a big mistake or not, and the only one who cannot see it is the referee. So if we can help the referee, then we should do it."

The referee on the field is in audio contact with an official in front of a television screen stationed in a truck outside the ground or in the league offices.

The referee can also run to the side of the pitch to check a video replay. Other than that the parameters for the system are vague and more clarity could come on Saturday in Zurich.

There has been constant controversy about what incidents the video assistant referee can get involved in, how far back in the play the VAR can go, how long it has been taking to make decisions and the confusion among fans in the stadium not knowing what is happening.

The VAR was used at almost every available opportunity during the first half of Wednesday's FA Cup replay between Tottenham Hotspur and Rochdale. It led to farcical scenes and for many fans ruined the very essence of football - the fact it is a free-flowing game.

"The first half was a little bit embarrassing for everyone," Spurs boss Mauricio Pochettino said. "I am not sure that system is going to help."

The problems have been so widespread that UEFA president Aleksander Ceferin has said the system will not be used in next season's European Champions League regardless of the IFAB decision. Former FIFA boss Joseph Blatter has also come out strongly against VAR.

FIFA says it has learned from the test phase. There has also been much less controversy during the second half of the Bundesliga season so far compared to a raft of VAR problems before the turn of the year.

With Infantino so keen to implement VAR at the World Cup, it is unlikely IFAB, world football's rule-making body, will go against him.

IFAB is separate from FIFA but the world governing body has four votes on the board. The other four votes are shared among the football associations of England, Scotland, Wales and Northern Ireland, given the sport was first formulated in Britain.

Six out of eight votes are needed for a change in football's rules. The FIFA Council meeting in Bogota on March 15 and 16 would then rubber-stamp VAR's use at the World Cup. But the advent of VAR is complicated by the fact that it can only be used at the highest level of the game and in wealthy countries. League games in some of the impoverished parts of the world and amateur park matches will not be able to benefit from the technology.