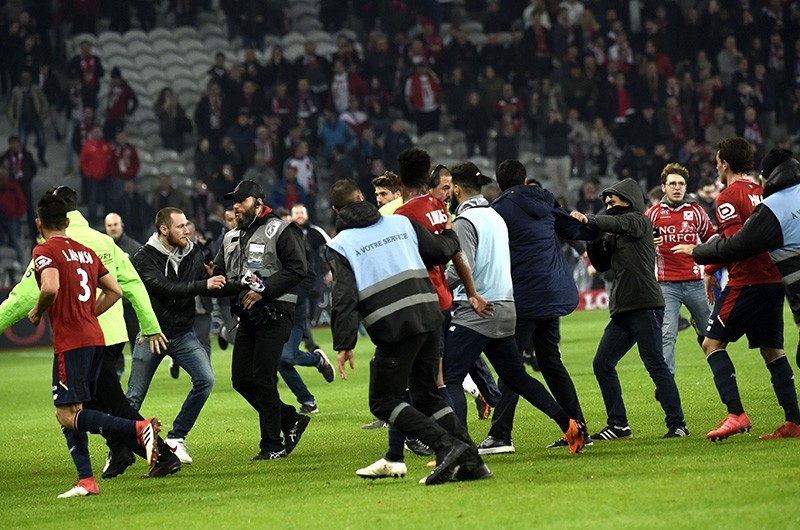 Lille' supporters invade the pitch at the end of the French L1 football match between Lille and Montpellier (AFP Photo)
by Mar 13, 2018 12:00 am

French football team Lille has filed a criminal complaint after its fans, angered by the team's performance, invaded pitch and attacked players at Stade Pierre-Mauroy at the end of Saturday's 1-1 draw with Montpellier in Ligue 1https://t.co/Fe3kh5wFQV pic.twitter.com/QJW8FYRuvs

Supporters got onto the pitch at Lille's Stade Pierre-Mauroy at the end of Saturday's 1-1 draw with Montpellier in Ligue 1.

Some of the fans shouted insults and even aimed kicks at players, including Nicolas Pepe, the Ivory Coast forward whose goal had earned Lille a draw.

The supporters -- upward of a hundred in number -- then gathered by the entrance to the players' tunnel, below where incredulous directors were watching on but were held back by stewards.

Prosecutors in the northern French city said they had ordered the opening of an investigation into the incidents Sunday morning and that Lille lodged their own complaint shortly after.

"There are people responsible and we are going to find them," Lille's Spanish director general Marc Ingla said in an interview with sports daily L'Equipe.

Lille president Gerard Lopez, the Luxembourg-born businessman who bought the club last year, told AFP Sunday that there would be "zero tolerance" in dealing with the perpetrators of the incidents.

"It is inadmissible, it is taking a club hostage, people who don't deserve it. Those people are not supporters," he said.

Lille will face disciplinary action from the French league for the incidents.

Saturday's result left them in the relegation zone -- champions as recently as 2011, the northern side is at serious risk of going down to the second tier for the first time since 2000.

"There is a line that should not be crossed. I was in the dressing room and there were frightened players in there."

Lopez had hoped the appointment of Marcelo Bielsa ahead of this season would help the club compete toward the top end of the table but the enigmatic Argentine was sacked late last year due to the team's poor form.

Bielsa has contested his sacking, seeking as much as 18 million euros ($22.2m) for wrongful dismissal.

Christophe Galtier was appointed coach during France's winter break but has only managed two wins in 10 league games so far.