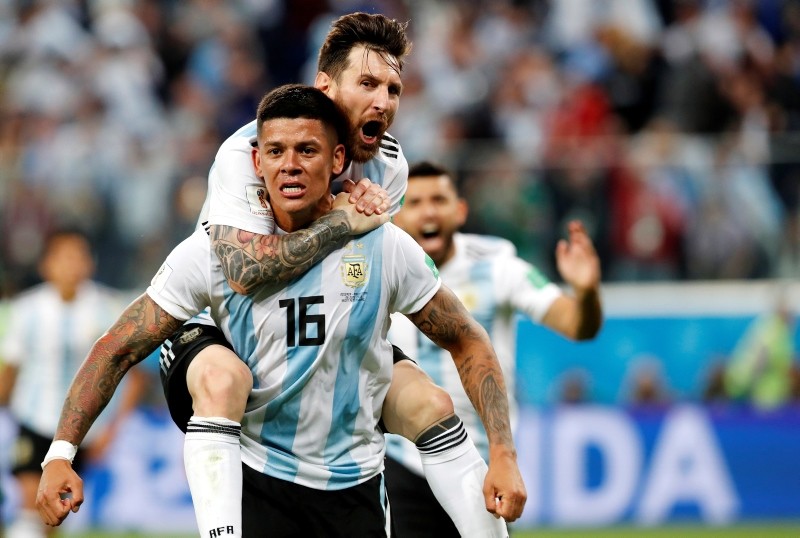 Marcos Rojo of Argentina celebrates with teammate Lionel Messi (top) after scoring the 2-1 during the FIFA World Cup 2018 group D preliminary round. (EPA Photo)
by Compiled from Wire Services Jun 26, 2018 12:00 am

A late goal by Marcos Rojo gave Argentina a dramatic 2-1 victory over Nigeria in Group D on Tuesday and sent the twice champions through to the knockout stages of the World Cup.

Lionel Messi scored his first goal of the tournament in the 14th minute with an expertly taken shot. However, Nigeria were level six minutes after the restart, when Javier Mascherano fouled Leon Balogun in the area and Victor Moses stepped up to slot the resulting penalty past Franco Armani, putting Argentina in danger of being eliminated without winning a match in Russia.

With the game ebbing away from Argentina, Gabriel Mercado crossed from the right in the 86th minute and Rojo turned the ball into the goal with a first time strike to spark wild celebrations from the Argentines.

Digeo Maradona, in the stands at the St. Petersburg Stadium, celebrated both goals wildly.

Argentina face France in the last 16 after finishing second in the group, while Croatia take on Group C runners-up Denmark. Nigeria and Iceland are out after finishing third and fourth, respectively.