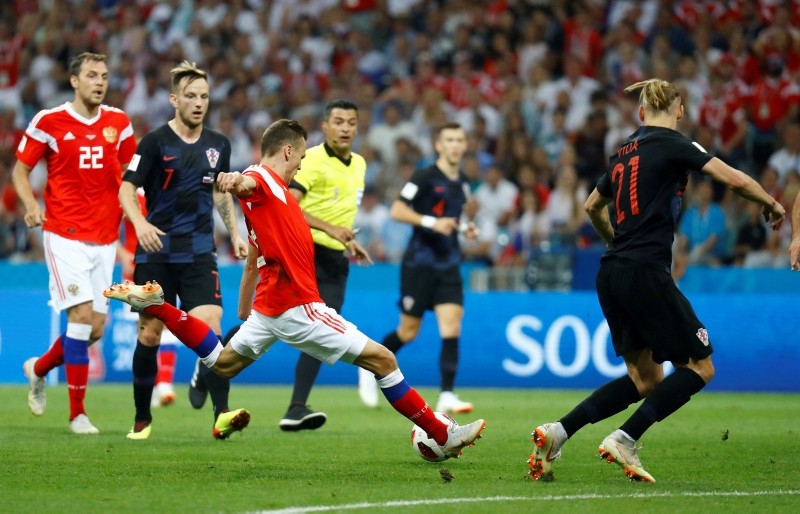 Danijel Subasic saved another penalty and Ivan Rakitic converted the decisive one as Croatia ended the fairy-tale run of World Cup hosts Russia with a 4-3 win on penalties on Saturday to set up a semifinal date with England.

Subasic saved Russia's first penalty from Fedor Smolov and, after Russia's Mario Fernandes and Croatia's Mateo Kovacic had failed to convert, Barcelona's Rakitic clinched the second shoot-out win for the Croats, who reached the last for the second time, following 1998.

The score was locked at 2-2 after regulation and extra-time, with Denis Cheryshev in the 31st minute and Brazil-born Mario Fernandes in the 115th on target for Russia, and Croatia temporarily leading from Andrej Kramaric in the 39th and Domagoj Vida in the 101st.

Croatian football boss Davor Suker admitted he needed some extra help in the deciding stages of the World Cup quarterfinal against hosts Russia.

"I drank vodka before the penalty shoot-out because I was so excited," the former star striker said early Sunday as he walked happily through the mixed zone of Sochi's Fisht Stadium.

His players meanwhile probably didn't toast the big win with vodka or other hard liqueur, they will simply need to recover swiftly as they now set their sights on reaching the July 15 final when they meet England in Moscow on Wednesday.

Luka Modric, Ivan Rakitic and the others left it late again, needing a second straight shoot-out to oust the fighting Russians, after holding off Denmark in the same way in the last 16.

"Of course there is some power left for the English. We do not want to stop, we will try to play our best game," coach Zlatko Dalic said, adding that "many players are a bit injured" after the grueling game.

"We have two matches to play and we are very motivated. We're giving our all. It will be a battle again but I trust us, I have belief in us."

Dalic's team has emulated the generation of Suker which surprised everyone on Croatia's debut on the global stage in 1998 by reaching the semifinals which they narrowly lost to hosts France, who went on to lift the trophy.

Croatia did not get through the group stage in the next three attempts but now they are back in the semis, and determined to take the next step.

"We have already accomplished something but this team can do more," Modric insisted.

The tournament in Russia is seen as the last chance for the gifted generation of Modric (32), Juventus forward Mario Mandzukic (32), Barcelona midfielder Ivan Rakitic (30) and Inter forward Ivan Perisic (29) to win a major title.

They will be up against a young and powerful England side led by tournament top scorer Harry Kane from Tottenham Hotspur, Modric's previous club in London before moving on to Real.

"They breezed past Sweden, they have a young team which is very alive and attacking. There are no favorites at this World Cup, you have to fight it out," Dalic said.

Modric said "we will prepare well" for a "a very difficult tight and demanding match" and added that it has not gone unnoticed that eight of England's 10 goals in Russia have come from set pieces.

"We saw how good they are from set pieces. We have to improve that element as we conceded there today," Modric said, referring to Russia's late 2-2 equalizer which sent up the penalties.

By then the tears of Dalic, which he cried in joy and relief when it was all over Saturday, will also have dried.

"Fortune favors the brave," he said. "I don't cry very often, but now I have a good reason to."