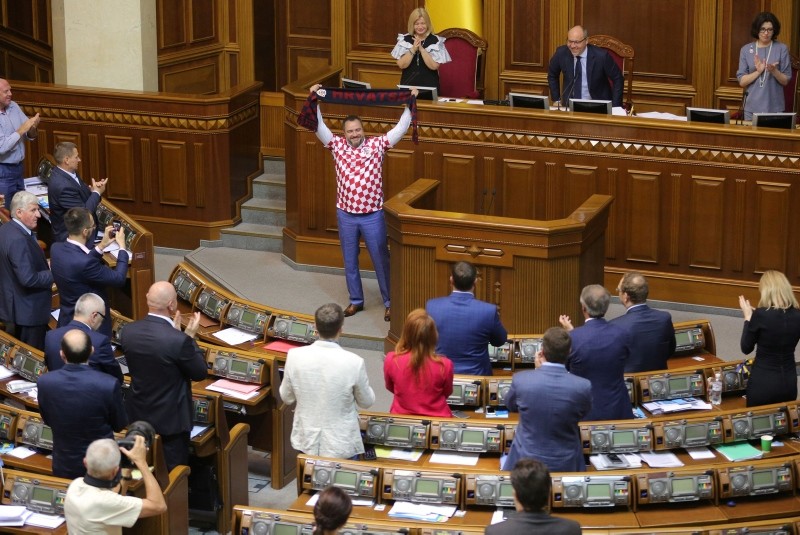 Ukraine football federation chief and lawmaker Andriy Pavelko, wearing a t-shirt of the Croatian football team, holds a scarf with the sign ,Croatia, during the parliament session in Kiev, Ukraine, July 10, 2018. (AFP Photo)
by Daily Sabah with Reuters
Jul 10, 2018 12:00 am

Ukraine supporters have flooded the Facebook page of football governing body FIFA with over 158,000 comments, most saying "Glory to Ukraine", after it fined Croatia's assistant coach for a video in which he used the same slogan.

FIFA hit Ognjen Vukojevic with a 15,000 Swiss franc ($15,000) fine and a warning after he and Croatian defender Domagoj Vida said "Glory to Ukraine" in a video posted after Croatia beat Russia in a World Cup quarterfinal on Saturday.

Speaking in the Ukrainian parliament in a Croatian national team t-shirt, the head of the Football Federation of Ukraine (FFU) and lawmaker Andriy Pavelko said the organization will compensate Vukojevic for the fine. Pavelko also offered Vukojevic a job at the FFU.

Relations between Ukraine and Russia remain highly charged following Moscow's 2014 annexation of Ukraine's Crimea region and its backing for a separatist rebellion in eastern Ukraine. Some Ukrainian politicians have called on countries to boycott the soccer World Cup, which Russia is hosting.

By Tuesday afternoon, FIFA's Facebook page had over 157,000 reviews from users giving it the lowest one-star rating, most less than 48 hours old and including the phrase "Glory to Ukraine!". Some added "Glory to Croatia!" and "Shame on FIFA!" 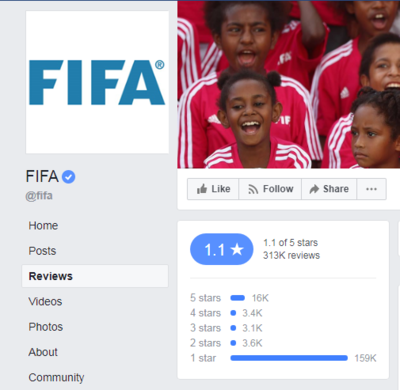 FIFA did not comment on the posts, but closed its review section.

"Support for Russia means support for annexation and military aggression. Shame on you!" posted a user who gave his name as Vadim Ermilow from Kiev.

"Please answer my question: why can a football player not express his attitude towards what is going on in the world?" asked another user, Oleg Nazarov from Ukraine's Kremenchuk.

Ukraine's national team did not qualify for the World Cup.

The country's football authority and some Ukrainian politicians have voiced support for Vukojevic, who FIFA said on Monday had apologized for his actions.

"'Glory to Ukraine' is a commonly used greeting in Ukraine ... (and) should not be interpreted as an act of aggression or provocation," the FFU said in a statement on Sunday.

On Tuesday, FIFA said it was is looking into another video featuring Croatia defender Domagoj Vida and posted on social media.

The video once more shows Vida saying "glory to Ukraine" as well as "Belgrade's burning," with former Croatia player and current staff member Ivica Olic next to him.

Croatia face England in the World Cup semi-finals in Moscow on Wednesday.