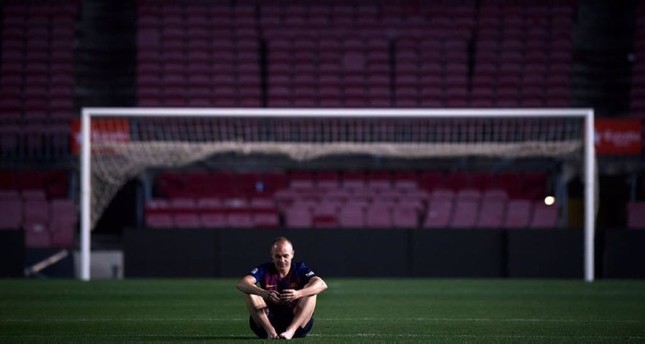 Barcelona legend Andres Iniesta has apologised after posting a photo on social media with two people in blackface as part of Epiphany celebrations.

The 34-year-old superstar who currently plays at Japan's Vissel Kobe had no intention "to upset anyone by displaying that photo," according to a statement by his agency sent to AFP on Wednesday.

"He would like to apologise to those people who may have felt offended," the statement said.

Iniesta's picture on Twitter and Instagram posted on Sunday showed his family and a group of people in costumes, taking part in the Three Kings Day, an important Christian festive tradition in Spain.

The January 6 holiday commemorates the visit of magi Melchior, Caspar and Balthazar to the newborn baby Jesus.

Large parades and other festivities are held across Spain featuring men dressed up as kings, with the role of Balthazar often played by a white man -- often a city councillor -- in black makeup.

Madrid's leftist mayor Manuela Carmena ended the tradition in the Spanish capital in 2016 and the city now employs a black man to play the role in its Epiphany parade, which is broadcast live across the country.

Iniesta, who lifted 32 major trophies and made 674 appearances for Catalan giants Barca, joined Vissel Kobe in May, calling his J-League move an "important career challenge".

The Spain icon's decision to choose Vissel arguably represents Japanese football's biggest transfer coup, with many top players now moving to cash-rich Chinese clubs in the twilight of their careers.

It also came as a timely boost to the J-League, which used to attract luminaries such as Brazilian great Zico and former England star Gary Lineker when it began in 1993, but has struggled to attract marquee players in recent years.

Iniesta -- who famously scored Spain's winning goal against the Netherlands in the 2010 World Cup final -- had been top of the wishlist of Vissel owner Hiroshi Mikitani.

The billionaire businessman is also the founder and CEO of Rakuten, Barcelona's main sponsor, and was heavily involved in the deal that brought Iniesta to Japan.

In December 2017 Atletico Madrid's French striker Antoine Griezmann apologised after receiving criticism on social media for posting a picture of himself on his official Twitter account dressed as a Harlem Globetrotter, covered in black paint and wearing a wig.

Share on Facebook Share on Twitter
Previous in Football Dubbed a "financial revolution," the debt restructuring project for... Next in Football Conquering the Super League with skillful gameplay, coupled with the...
DAILY SABAH RECOMMENDS