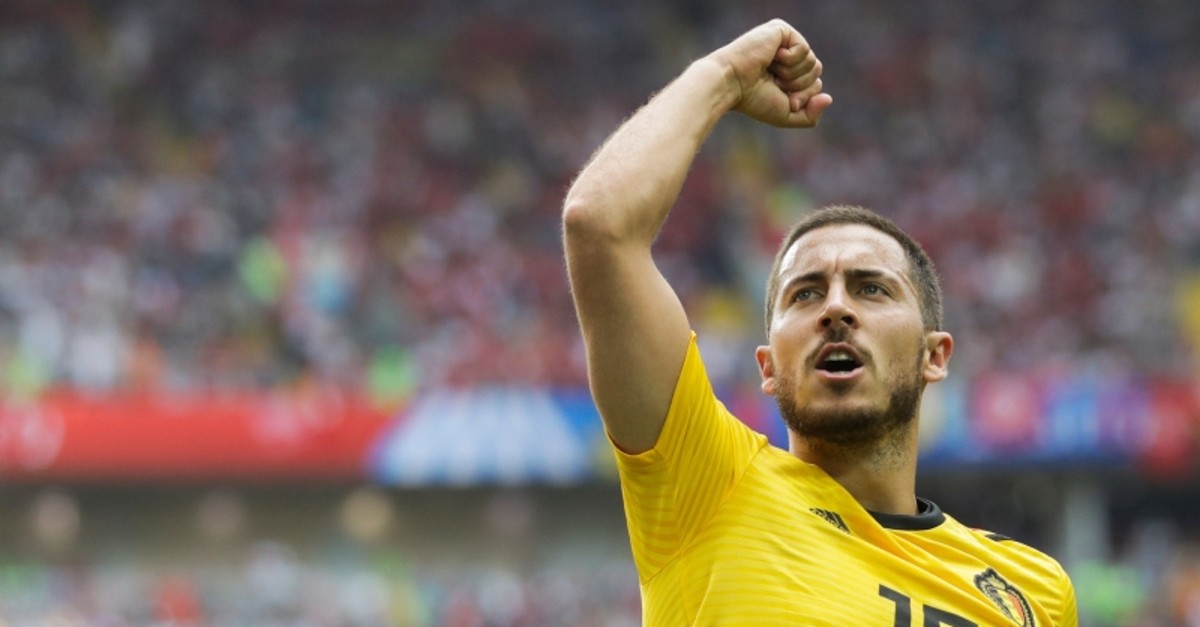 Belgium's Eden Hazard celebrates after scoring his side's fourth goal during the group G match between Belgium and Tunisia at the 2018 soccer World Cup in the Spartak Stadium in Moscow, Russia, Saturday, June 23, 2018. (AP Photo)
by Compiled from Wire Services
Jun 07, 2019 11:27 pm

Forward Eden Hazard has joined Real Madrid from Chelsea on a five year deal, the La Liga club said in a statement Friday.

The fee for Hazard, 28, was not disclosed but according to reports Real will pay an initial fee of 100 million euros ($113 million) with another 45 million euros in potential add-ons.

Hazard has been hoping for a move to Real for over a year, with Chelsea blocking his attempt to leave last year before the Blues finally accepted his wish in the closing weeks of the season.

Speaking after the Europa League final, Hazard had said: "I think it's a goodbye. My dream was to play in the Premier League, I did it for seven years. Maybe it's time for a new challenge."

Hazard joined Chelsea from Lille in 2012, and in his final campaign at Stamford Bridge he became just the fourth man in Premier League history to score 15 goals and make 15 assists in a season.

The 21-year-old Jovic, who scored 17 goals in 32 Bundesliga games for Eintracht Frankfurt last season, agreed to a six-year deal with Madrid — to be completed following a successful medical exam. Madrid-based sports daily Marca reported the club was paying 60 million euros ($67.5 million) with a bonus of 5 million euros ($5.6 million), with 30% of the transfer fee going to Benfica, Jovic's former club.