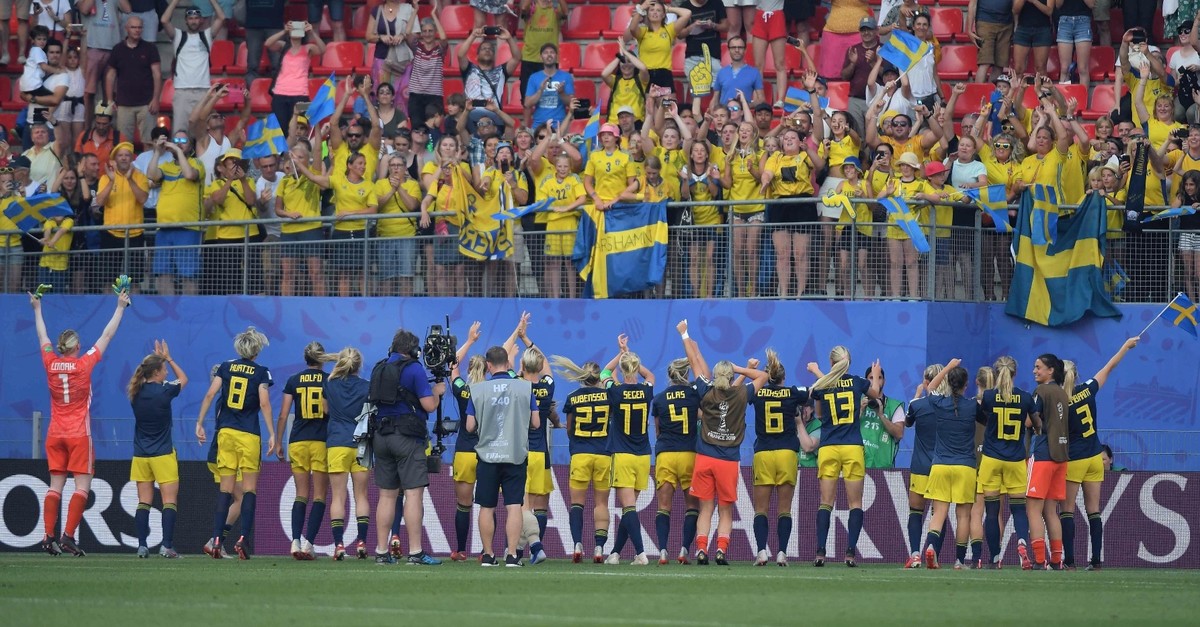 The Swedes beat the Germans in a 2-1 comeback victory on Saturday, their first win over Germany in a major tournament in more than two decades

With Germany out of the way, Sweden believes it could win it all. Stina Blackstenius scored the go-ahead goal just minutes into the second half and Sweden surprised Germany with a 2-1 quarterfinal victory Saturday night at the Women's World Cup. It was Sweden's first victory over Germany in a major tournament in 24 years, and it sent the ninth-ranked Swedes into the semifinals against the Netherlands.

The second-ranked Germans, who won back-to-back World Cup titles in 2003 and 2007, were the presumptive favorites on their side of the bracket. Instead, they'll head home. Germany coach Martina Voss-Tecklenburg said her team seemed to lose focus.

"We knew it was going to be difficult," she said. "We shall not let this bring us down. We have to make sure this process goes on despite the defeat, to keep on growing, to gain strength and channel this negative experience into something positive and to learn our lessons from it."

The eighth-ranked Dutch defeated Italy 2-0 earlier Saturday, setting up the semifinal Wednesday in Lyon. The United States plays England in the other semifinal on Tuesday. The final is July 7.

Sweden's victory came in a rematch of the 2003 World Cup final which Germany won 2-0 in Shanghai. The teams also met in the final at the 2016 Olympics, with Germany winning its first gold medal with a 2-1 victory. Sweden's last win over Germany in a major tournament was in the group stage of the 1995 World Cup.

"We knew we had a chance, and then of course we had to play our best game of the tournament to be able to beat Germany," Gerhardsson said. "So I'm not surprised, but I knew we had to play and perform at our best on the offense and the defense. And I think we did."

Lina Magull's fantastic finish on a half-volley put Germany up in the 16th minute, with Sara Daebritz setting up the goal that veteran Sweden goalkeeper Hedvig Lindahl couldn't get to. Sweden's Sofia Jakobsson tied it in the 22nd minute with a strike that went under the outstretched leg of German goalkeeper Almuth Schult. It was the first goal the Germans had allowed at this World Cup, stopping a streak of 381 scoreless minutes. In 2007, Germany went a record 540 minutes without conceding a goal. Blackstenius scored on a rebound off Fridolina Rolfo's header just about three minutes into the second half to break the stalemate.

"I'm really happy. I'm so proud of the team, the players in the game, the players sitting on the bench, the staff. We're doing this together," Jakobsson said. "I'm so grateful to be on a team like this."

With temperatures in the upper 80s in Rennes, the teams were allowed a water break in each half.

Dzsenifer Marozsan returned to the bench for Germany after missing three matches with a broken toe on her left foot. Marozsan was injured in Germany's opening match against China. She started the second half and sent a free kick toward the goal in the 87th minute, but Lena Oberdorf's header was off the mark. Marozsan was an inspirational story for the tournament in France, having returned to the game after a pulmonary embolism kept her sidelined for several months last year.

With the win, Sweden also secured a spot in the 2020 Olympics, along with the Netherlands and Great Britain. The top three European teams at the World Cup qualify for an Olympic berth.

"We failed to penetrate their defense even when they were tired. It is a real shame that we can't defend our Olympic title and that we will be without a big tournament next summer," Schult said. The Germans had won 12 straight matches going into the World Cup.