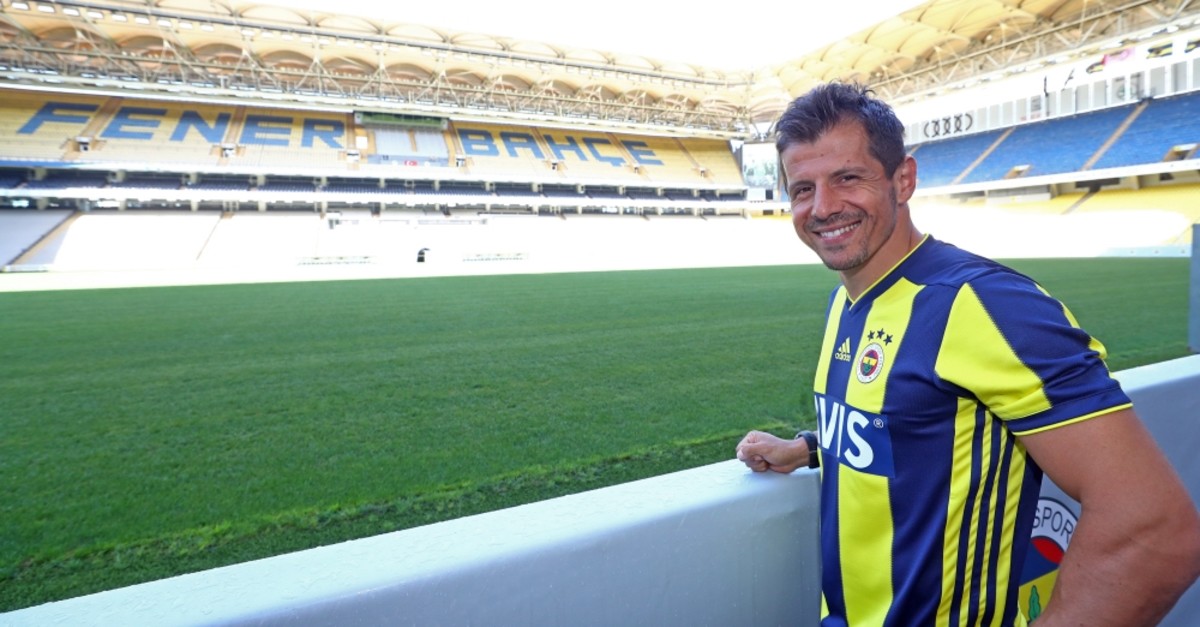 Emre Belözoğlu is leaving Süper Lig runner-up Medipol Başakşehir to rejoin his former team Fenerbahçe where he really made his name, while Liverpool's famed ex-manager Rafa Benitez is off to China to mark the beginning of a new era for him

The summer transfer window is in high gear in the Turkish and European leagues. In Tuesday's developments, veteran player Emre Belözoğlu officially signed with his former team Fenerbahçe after donning a Medipol Başakşehir jersey for a few seasons. In other news that shook headlines, Rafa Benitez, the accomplished coach of the likes of Liverpool, Inter and Real Madrid, completed a move to China's Dalian Yifang.

Belözoğlu's contract with the Süper Lig's runner-ups ended this season after the 38-year-old midfielder spent four years with the team.

His appearances were varied this season and he scored only one goal. Fenerbahçe announced a one-year deal with Belözoğlu. Speaking to Anadolu Agency (AA), Belözoğlu hailed Başakşehir's accomplishments that brought the team closer to a title after a long spell in the Süper Lig as an up-and-coming outfit with no real success.

"Fenerbahçe always had a special place in my heart," Belözoğlu said following the news of his signing.

The midfielder had joined the Yellow Canaries from Newcastle United in the 2008-09 season and spent seven seasons with the Süper Lig powerhouse.

The Yellow Canaries, which suffered a tumultuous streak of losses this season before recovering toward the end to escape from relegation, is also interested in Çaykur Rizespor's Kosovar international Vedat Muriqi. Rizespor Chairman Hasan Kartal told reporters yesterday that both Fenerbahçe and Galatasaray tabled bids for the 25-year-old forward and they were willing to send the young talent to "either team."

"We have a price in our head and we are willing to sell him if we can reach a deal," he said.

Meanwhile, media outlets reported that the Yellow Canaries were "in the last stages" of a deal with al-Ittihad's Garry Rodrigues. The Dutch midfielder, who formerly played for Galatasaray, was reportedly among five players the Saudi club plans to part ways with.

Fenerbahçe's main rival Beşiktaş is also looking for a big name transfer for the new season and Italian media outlets reported that Sassuolo's Kevin-Prince Boateng was shortlisted by the team. The 32-year-old German-Ghanaian midfielder has a deal with the Italian side until 2021 through the club acknowledged that they were open to bids.

Boateng appeared in 13 matches in the first half and scored four goals for Sassuolo before moving to Barcelona on loan. His spell with the Spanish side proved disastrous, as he was given playing time in only three matches.

"After a long path... We start a new challenge! I'm happy to begin this new project with Dalian Yifang," the Spaniard wrote on his verified Twitter account.

Benitez guided Liverpool to the UEFA Champions League crown in 2005 and has managed European giants like Inter, Chelsea, and Real Madrid.

The 59-year-old becomes the latest big-name foreign manager to try his luck in the Chinese Super League (CSL), which have included the likes of Brazil's World Cup-winning coach Luiz Felipe Scolari, and Italian legend Fabio Cannavaro, who remains in charge at CSL powerhouse Guangzhou Evergrande. Dalian Yifang, who is currently in joint 10th place in the CSL, also confirmed his appointment. "Dalian Yifang Football Club is honored to have Mr. Rafa Benitez," the club said on its social media account. "We believe that through his efforts, he will be able to rebuild the glory and realize the expectations of the majority of fans."

The club, which did not divulge terms, has never won the Chinese league title. Unconfirmed reports have said previously that Benitez had been offered a contract worth 12 million euros ($13.56 million) per year by Dalian Yifang. Benitez was a hugely popular figure at Newcastle after leading the club to promotion in his first full season and stabilizing Newcastle in the Premier League over the past two years.

Early in his coaching career, Benitez won two Spanish La Liga titles at Valencia, the come-from-behind Champions League title with Liverpool in the "Miracle of Istanbul," and was twice named UEFA Manager of the Year.

He never won the English Premier League with Liverpool, however, but subsequently won some silverware at Chelsea and Napoli.

Benitez didn't last a full season before Real Madrid dismissed him early in 2016. Joining Newcastle shortly after, he was unable to save the team from relegation but became hugely popular with fans by earning a promotion straight back to the Premier League the following season.

Newcastle finished well clear of relegation this season, raising hopes for the club's future. But Benitez has said that differing visions over strategy with club owner Mike Ashley prevented them from reaching an agreement on a contract extension.

In France's Ligue 1, Paris Saint-Germain completed the move for Pablo Sarabia of Sevilla in a deal reportedly worth 20 million euros. The 27-year-old playmaker joins the French champions for a five-year deal. Sarabia spent three years with the Spanish side, a tenure marked with 101 appearances and 43 goals. Kicking off his career in Real Madrid, Sarabia had spent five years with Getafe before the Sevilla move.

Sarabia was also shortlisted by Premier League and Serie A sides before, including interest from Chelsea and Roma. "Sevilla FC wishes to thank Sarabia for all of the great work that he carried out now that his time as a Sevilla comes to a close. He displayed enormous professionalism at all times and we wish him the best of luck in his new professional adventure," the Spanish club said in an online statement yesterday.

The Spanish side, meanwhile, secured Luuk de Jong of PSV Eindhoven in a 15-million-euro deal for a four-year contract, the Dutch club said Tuesday. De Jong, 28, scored 112 goals in 204 matches for PSV over the last five seasons, in which they won three Dutch league titles, and was the joint top scorer in last season's Dutch league with 28 goals. He has also played in the Bundesliga with Borussia Moenchengladbach and in the Premier League with Newcastle United. De Jong played for the Netherlands in last month's UEFA Nations League final against Portugal.

Elsewhere, Tottenham Hotspur said yesterday they have signed winger Jack Clarke from Leeds United but will immediately loan him back to the Championship side. The 18-year-old has agreed to a contract until 2023 but will stay at Leeds for the forthcoming season. Clarke scored twice in 25 matches for Leeds last year, helping them to the playoffs in the championship.

"I'm delighted to join Tottenham and in the short-term, I'll be giving my all to hopefully help Leeds win promotion," Clarke said.

Clarke is the first signing made by Champions League finalists Spurs in 18 months after they failed to add to their squad in the last two transfer windows.