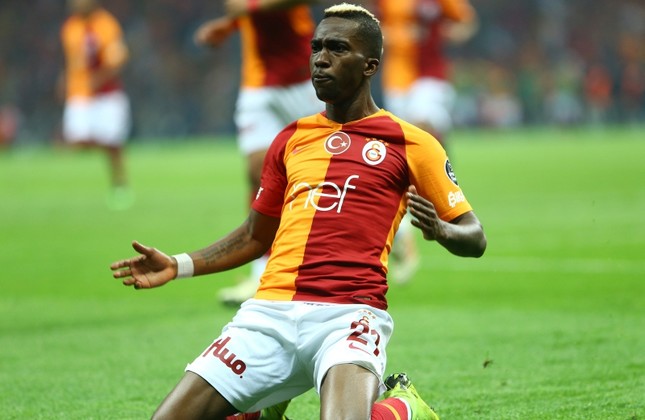 Nigerian midfielder Henry Onyekuru celebrates his 64th minute goal in Week 33 match against Istanbul side Başakşehir, helping Galatasaray to defeat their closest rival 2-1 and clinch the league title, on May 19, 2019. (Photo: Sabah/Mustafa Nacar)

"Monaco are delighted to announce the signing of Henry Onyekuru from Everton. Our new attacking midfielder joins us on a five year deal," Monaco announced on Twitter.

"Henry Onyekuru has completed transfer to Ligue 1 club Monaco for an undisclosed fee," Everton said on its website. He reportedly joins the Ligue 1 outfit for 17 million euros ($19 million).

"I'm very happy to join a great club like AS Monaco. I will give everything to improve and help the club to have a great season. I look forward to meeting my teammates," the 22-year-old told Monaco's website.

I want to thank @everton for the opportunity and making it possible for me to experience the best year of my career at @galatasaray . My time in Turkey was nothing short of amazing! The supporters, the club and my teammates made me feel at home from Day 1! We made history Thank U — Henry Onyekuru (@henryconyekuru) August 12, 2019

Onyekuru, who has made 11 appearances for the Super Eagles, originally joined the Premier League side in 2017 but has spent the two past campaigns on-loan with Anderlecht and Galatasaray, helping the Istanbul football powerhouse to win the Turkish Süper Lig title for the 22th time in its history. The Yellow-Reds also won the Turkish Cup.

In July 2018, Galatasaray signed Onyekuru on a season-long loan from Everton for 800,000 euros to have a stronger squad. He scored 16 goals in 44 appearances for Galatasaray

He previously played for Belgian second division side K.A.S Eupen before joining Everton in the summer of 2017 for 7 million euros.

Leonardo Jardim's options in front of goal could be strengthened further with Sevilla's France forward Wissam Ben Yedder being linked with a move to Stade Louis II.

However former club captain Radamel Falcao and Portugal wide-man Rony Lopes have been linked with moves away from the Principality. Falcao will reportedly join Galatasaray, although the move is yet to be confirmed.

Finishing 2017-2018 second, Monaco made bad start next season and Jardim was sacked with former France and Arsenal legend Thierry Henry in October, who couldn't turn the tide and replaced again with Jardim only three months later.

Share on Facebook Share on Twitter
Previous in Football The Netherlands' most-capped player and a former Galatasaray scorer,... Next in Football Istanbul is ready for Wednesday's UEFA Super Cup showdown between...
DAILY SABAH RECOMMENDS