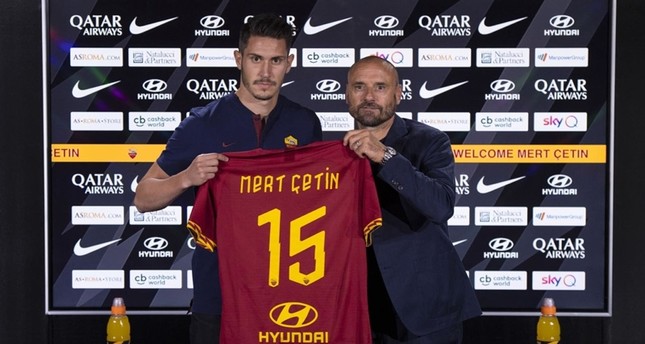 Roma will pay €3 million ($3.33 million) to Ankara-based Gençlerbirliği for the transfer.

"As part of the agreement, Gençlerbirliği also retain a right to 10% of any future transfer fee -- in the event the player is sold for a sum exceeding €5 million," Roma said in a statement.

"I know the size of the club I am going to be representing," Çetin said.

Çetin will be joining his peer Cengiz Ünder, Turkish international midfielder who signed with Roma in 2017 and recently extended his contract with the club until 2023 after a stellar season.

The 22-year-old defender will wear the number 15 jersey for Roma this season.

Çetin was a member of the squad that helped Gençlerbirliği to promote to the Turkish Süper Lig last season after a one-year hiatus. He scored one goal in 25 matches in the Spor Toto 1. Lig.

Dubbed as Turkey's "footballer factory" through state-of-the-art facilities, Gençlerbirliği released an emotional farewell message for Çetin, who has played for every age group of the Ankara club since he was 10.

"My conversations with the board, the work we've been doing with the coach, the relationship with my teammates and the love of the fans has all made me realise once again what I had already learned during these four years-that Rome is my home," Dzeko said, according to Roma's official website.

The 33-year-old forward joined Roma in 2015 from the English club Manchester City. He has also played for Bosnia's Zeljeznicar, FK Teplice and Usti nad Labem in Czech Republic, and German club Wolfsburg. He has won two Premier League titles, a League Cup and an FA Cup with Manchester City.

Dzeko also was a part of the Bosnia squad during the 2014 FIFA World Cup in Brazil.

Share on Facebook Share on Twitter
Previous in Football The all-English finale of the UEFA Super Cup brought tens of thousands... Next in Football A fight between fans of rival football teams Motagua and Olimpia at...
DAILY SABAH RECOMMENDS