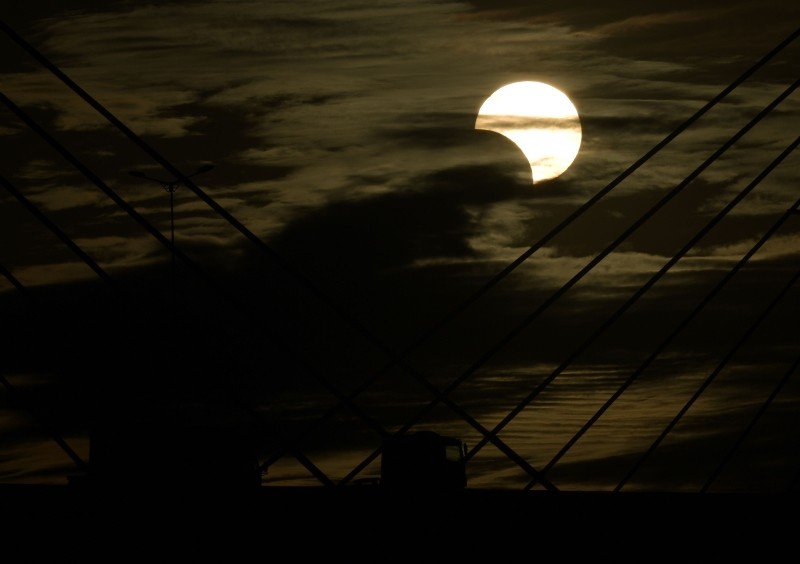 Tens of thousands of tourists and locals gaped skyward Tuesday as a total eclipse of the sun darkened the heavens over Chile and Argentina.

Tourists from around the world gathered to witness the cosmic spectacle, which began in the morning as the moon crossed in front of the sun and cast a shadow that passed over a tiny uninhabited atoll in the South Pacific and headed to South America. Chile and Argentina were the only inhabited places where the total eclipse could be seen.Photo shows the solar eclipse as seen from Porto Alegre, Rio Grande do Sul, Brazil, on July 2, 2019. 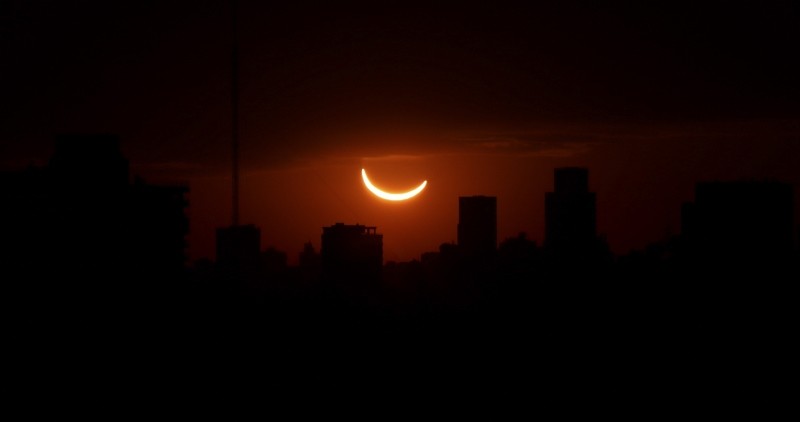 Thousands of visitors also trekked to neighboring areas of Argentina where the eclipse was also total.

Solar eclipse as seen from Congreso neighborhood in the city of Buenos Aires, Argentina, on July 2, 2019. 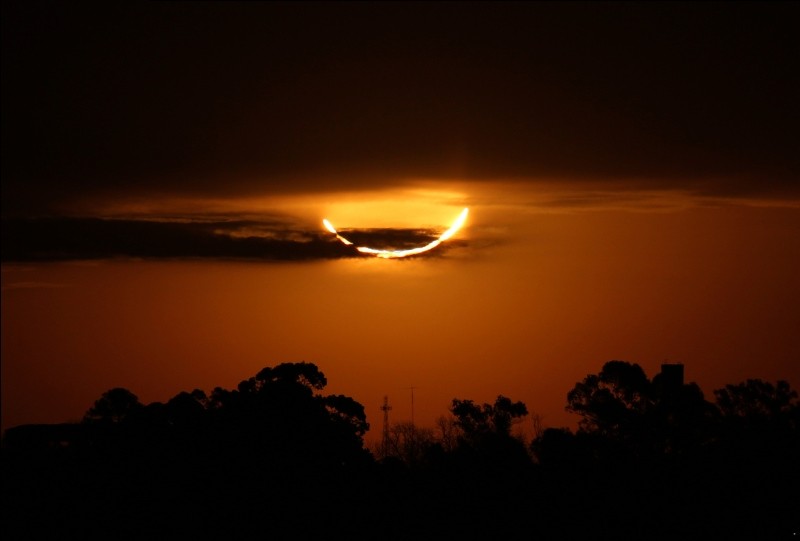 A solar eclipse occurs when the moon passes between the Earth and the sun and scores a bull's-eye by completely blocking out the sunlight. 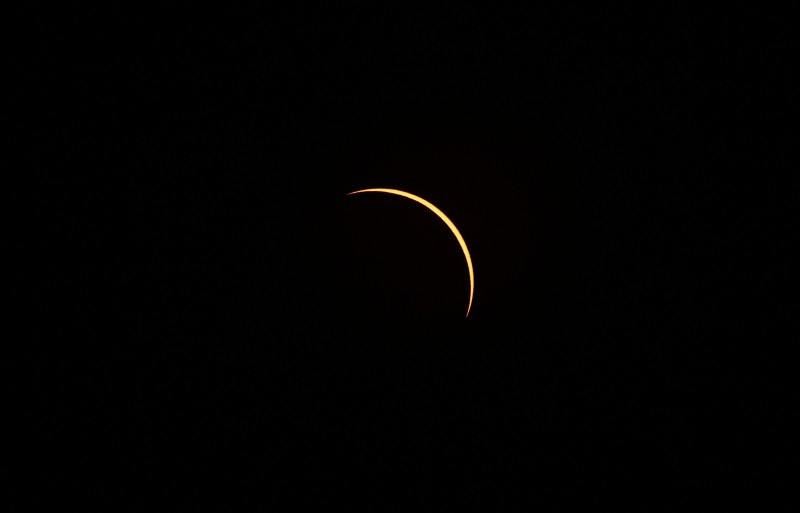 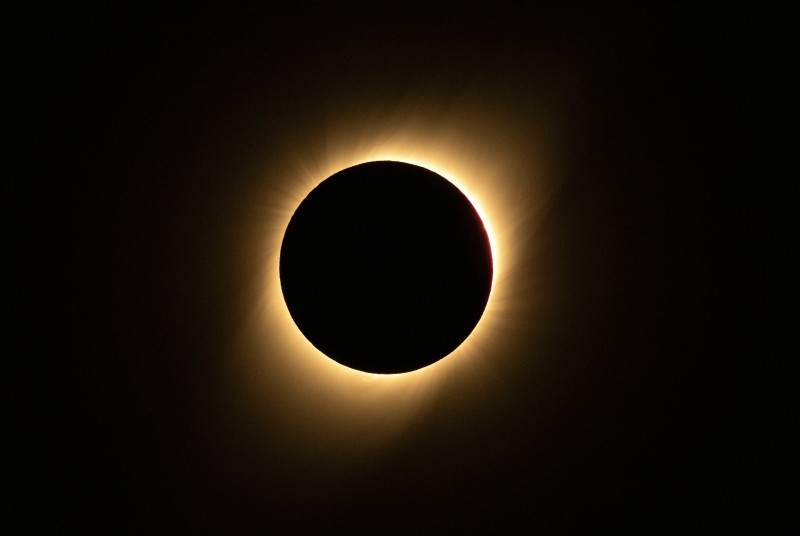 Large crowds congregated in the town of La Higuera, some 2,400 meters above sea level and near the landmark La Silla Observatory, operated by the European Southern Observatory. 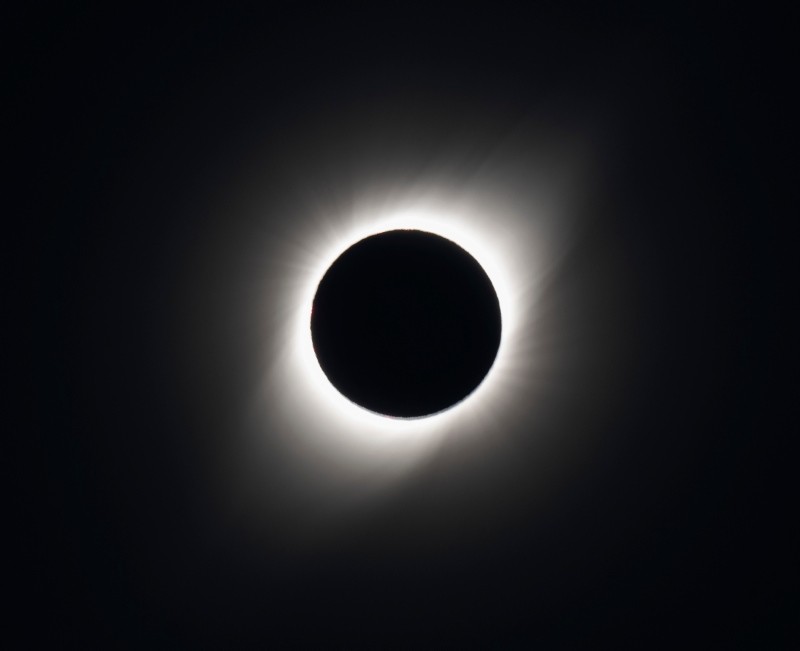 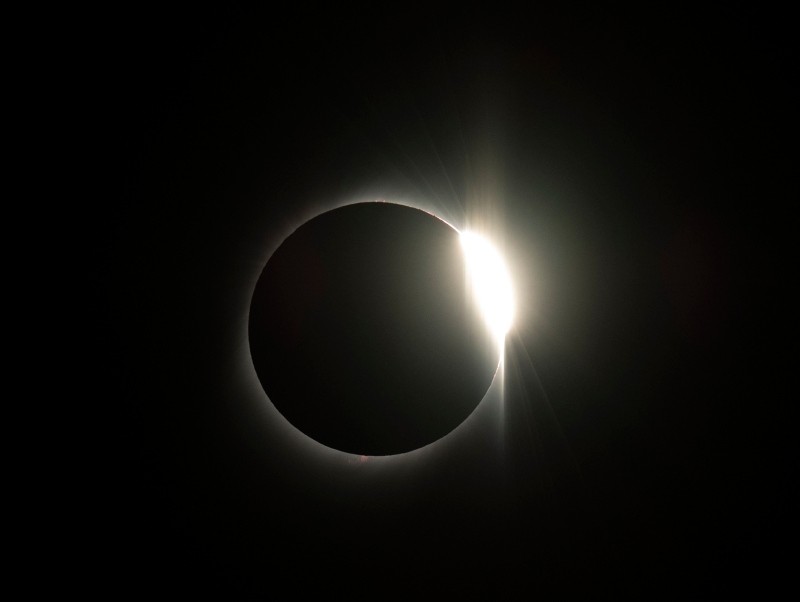 The diamond ring effect is seen during the total solar eclipse from El Molle, Chile, on July 2, 2019. 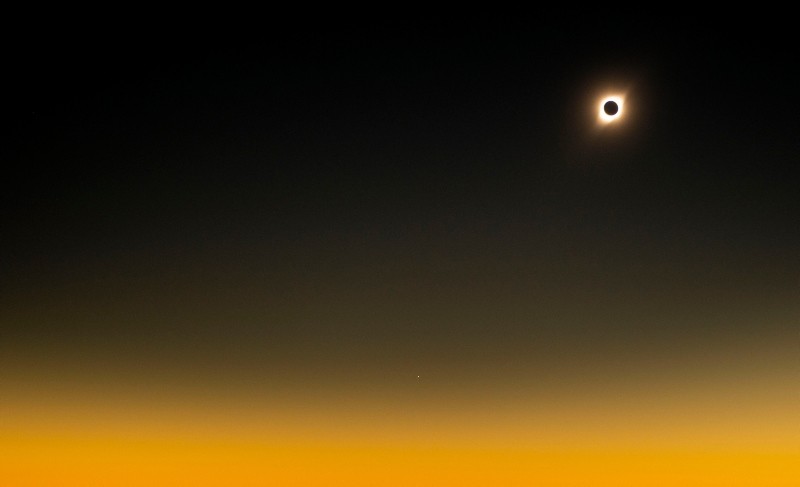 View of the total solar eclipse from a commercial flight while overflying La Serena, Chile, on July 2, 2019

This combination of pictures created on July 2, 2019 shows different stages of the solar eclipse as seen from the La Silla European Southern Observatory (ESO) in La Higuera, Coquimbo Region, Chile. 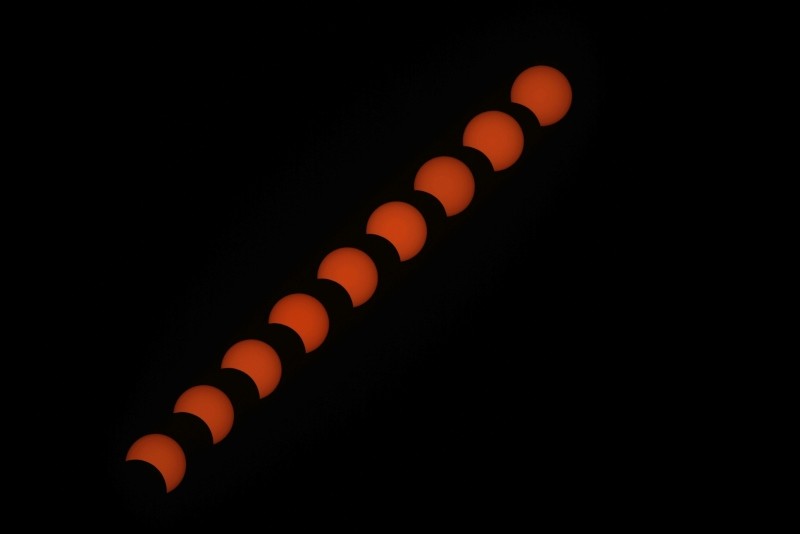 The Earth's next total solar eclipse will be Dec. 14, 2020, and it also will cross Chile and Argentina, though on a different path. 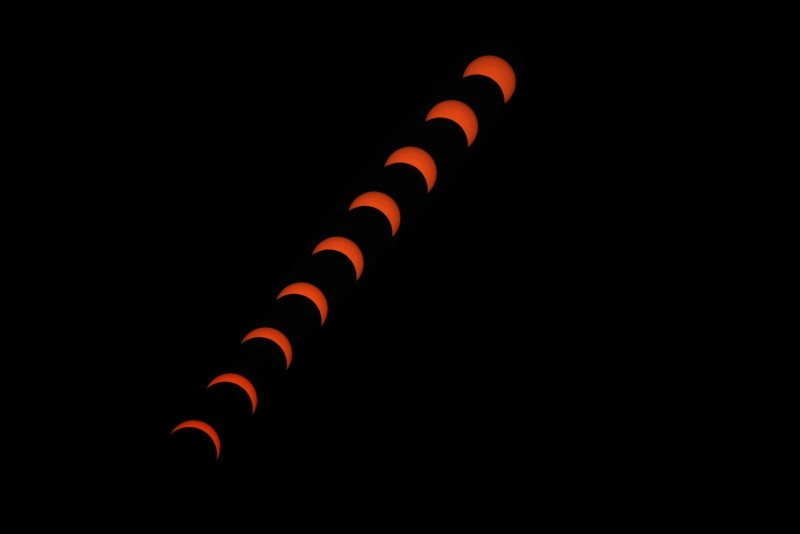 In 2017, millions of people in the United States witnessed the phenomena, with a full solar eclipse visible in parts of 14 states and a partial eclipse seen in nearly the entire country. It was the first such widespread eclipse in the U.S. since 1918. 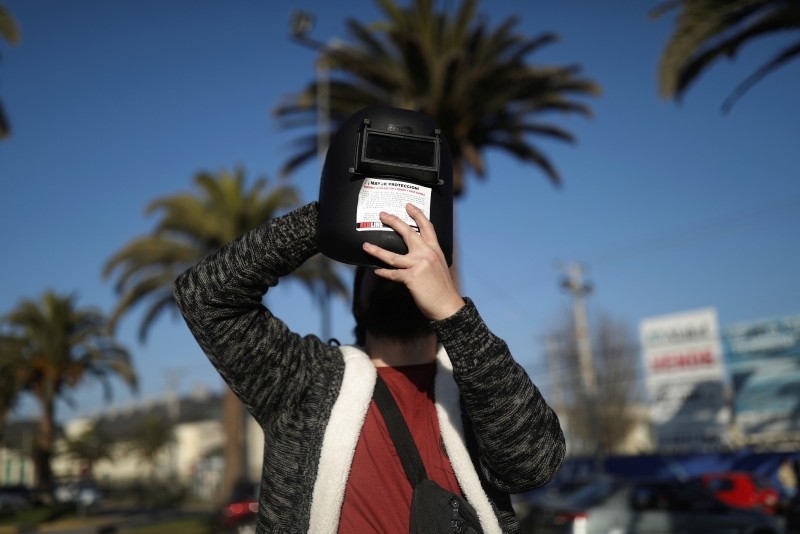 A man uses a protective mask to observe a solar eclipse at La Serena, Chile, July 2, 2019. 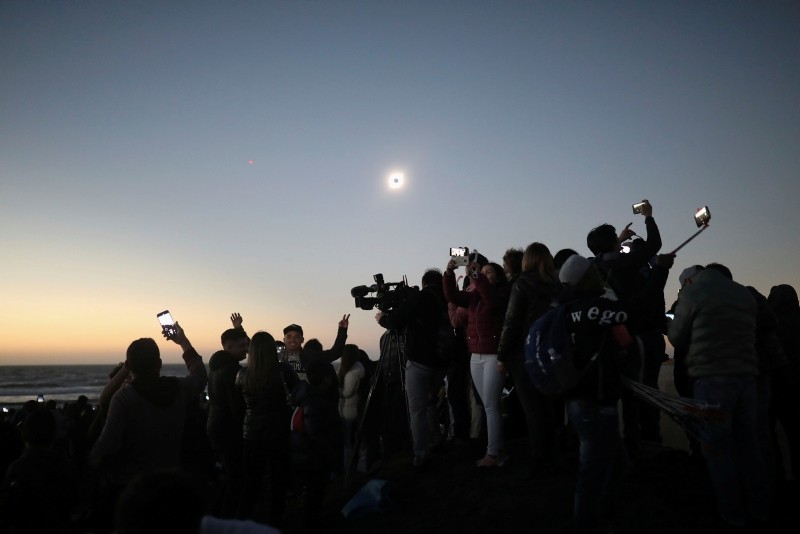 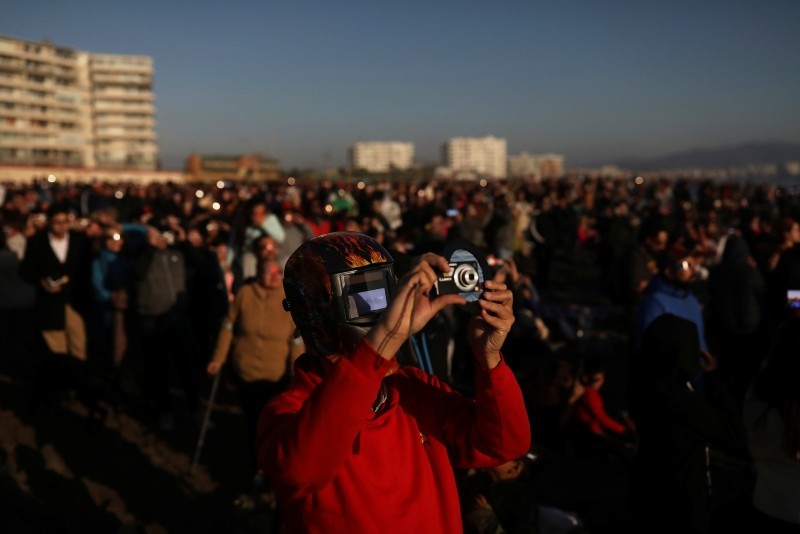 Town officials distributed more than 2,000 cardboard-frame protective eyeglasses at local schools and community centers while workers built statues of huge sunglasses and a darkened sun on a local square. 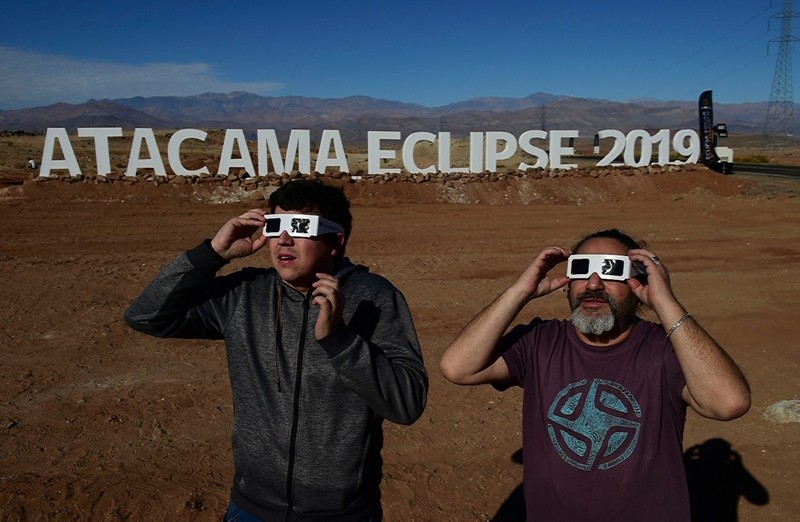 Tourists try special glasses to watch an eclipse at the entrance of an astronomical camp which expects to receive thousands of tourists to observe the July 2 total solar eclipse, in the commune of Vallenar in the Atacama desert about 600 km north of Santiago, on July 1, 2019. 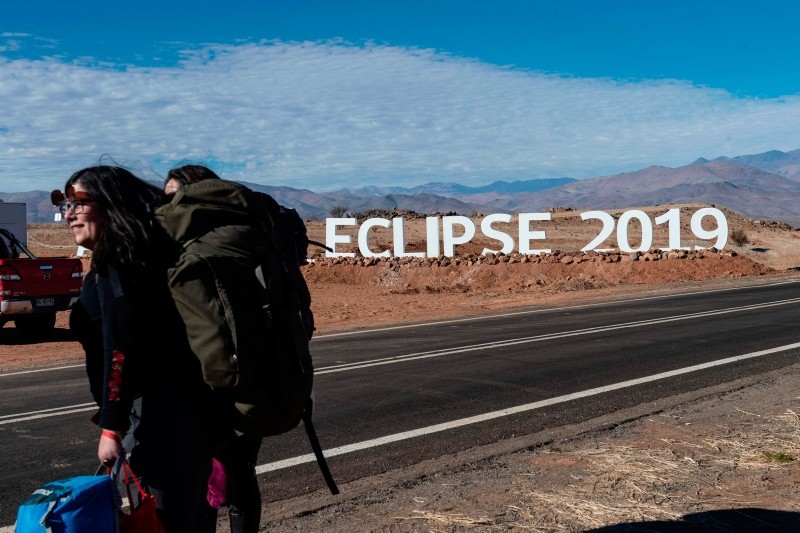 Tourists arrive at an astronomical camp which expects to receive thousands of tourists to observe the solar eclipse, in the commune of Vallenar in the Atacama desert about 600 km north of Santiago, on July 1, 2019.