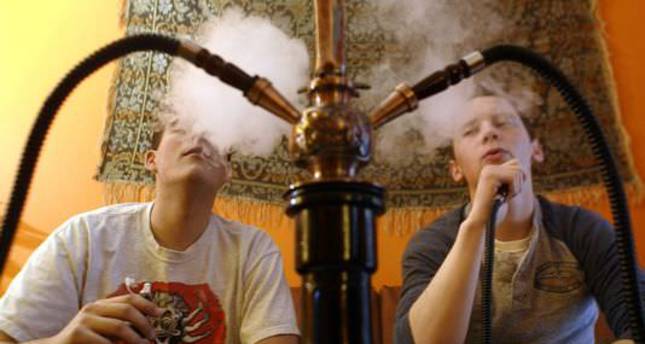 by Daily Sabah Nov 25, 2014 12:00 am
Hookah smokers intake higher levels of benzene, a chemical that increases the risk of leukemia, according to the results of a scientific study released last week by San Diego State University. The study published in "Cancer, Epidemiology, Biomarkers and Prevention," a journal of the American Association for Cancer Research showed that benzene metabolite – SPMA (S-phenylmercapturic acid) – levels in hookah smokers were found to be four times higher than non-smokers.

Excessive concentrations of benzene might induce bone marrow depression. The scientific study examined urine samples of 105 hookah smokers and 103 non-smokers. The samples were collected before and after subjects had attended hookah lounges. Scientists demonstrated that the risk of developing leukemia was even higher among non-smokers who were also present at such lounges. The study findings reveal that hookah tobacco smoking is not a safe alternative to smoking other forms of tobacco.

Coronary heart disease, lung diseases or mouth cancer can also develop in hookah smokers due to the higher level of exposure to benzene. Consumption of different forms tobacco has led to the deaths of more than 6 million people. Certain countries have banned hookah lounges because of its fatal impacts on health. Scientists suggest people should reduce or avoid hookah tobacco use.