Shift in vaccine use needed for polio-free world by 2019: WHO experts 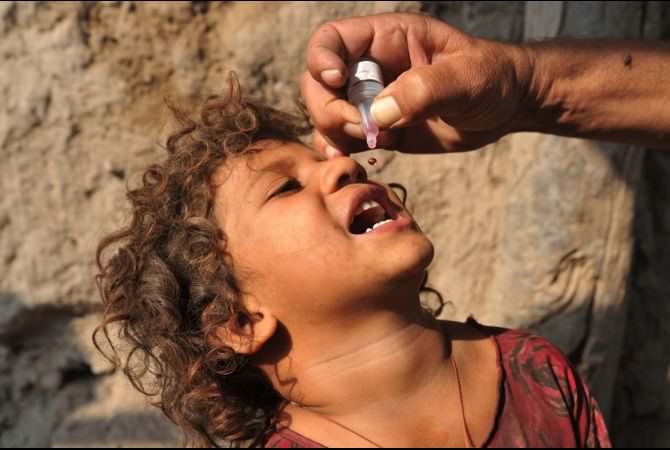 Pakistan and its war-battered neighbor Afghanistan is still on the list of countries where the disease is prevalent. ()
by Oct 24, 2015 12:00 am
As World Polio Day is observed Saturday, a World Health Organization expert panel called for a shift in the kinds of vaccines used to fight polio, insisting full eradication of the crippling disease is within reach. If this happens, experts foresee that a polio-free world could be achieved by 2019.

The WHO Strategic Advisory Group of Experts (SAGE), which advises the UN health agency on immunisation policies, warned on Friday that among the biggest obstacles to eradicating polio were the sporadic outbreaks of the disease caused by live polio virus used in some vaccines.

"We think it's realistic that we will get polio eradicated in the next few years," SAGE chair Jon Abramson told reporters in Geneva.

After facing hundreds of thousands of cases of polio as late as the 1980s, there have so far this year been just 51 people infected with the wild form of the crippling disease that affects mainly young children.

With no cases of wild polio registered in Africa since August 2014, the wild version of the virus now exists only in Afghanistan and Pakistan.

"The problem now is that we are seeing more cases of vaccine-caused polio than we are of wild type," Abramson said.

Vaccine-derived polio infections are in rare cases caused by one type of polio vaccine, which contains small amounts of weakened but live polio virus.

Oral polio vaccine (OPV) replicates in the gut and can be passed to others through faecal-contaminated water, thus imperilling unvaccinated children.

WHO has already recommended that OPV be phased out worldwide and replaced by the inactivated polio vaccine (IPV), but due to shortages of supply the shift is taking time.

Since the so-called trivalent vaccine containing the type two polio virus causes the most outbreaks, SAGE is now calling on countries still using this vaccine to replace it with the bivalent version by May next year.

"What that will do is stop the vast majority of outbreaks of vaccine-related paralysis," Abramson said, acknowledging that "it won't stop all the individual cases, but it will stop somewhere near 90 percent of the outbreaks where you have multiple cases in the same area."

He pointed out that halting the use of the trivalent OPV vaccine was particularly important in areas of conflict, where overall vaccine coverage was generally low.

"It is particularly in those areas that the vaccine is given at low coverage, which is the root of the problem, where the virus in the vaccine can begin to be transmitted and start paralysing children," he said.
Last Update: Oct 25, 2015 4:45 am
RELATED TOPICS