Netherlands to ban e-cigarettes for under 18-year-olds 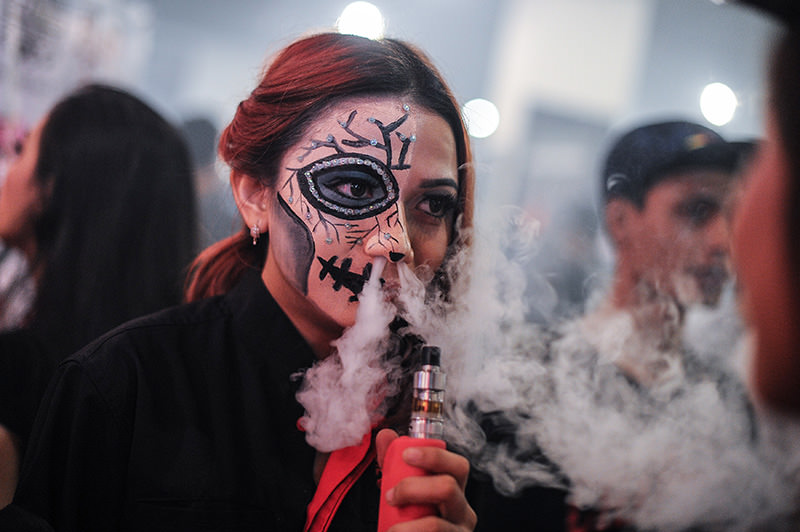 A promoter with a painted face smokes an electronic cigarette during the VapeFair in Kuala Lumpur on December 5, 2015. (AFP Photo)
by Dec 12, 2015 12:00 am
Electronic cigarettes and water pipes will be banned in the Netherlands for children under 18 from next year, the government said, after finding that the devices were more damaging to health than expected.

E-cigarettes, which electrically vapourise a nicotine-infused solution, are defended by their proponents as a healthier alternative to conventional cigarettes, but the government said its studies showed they were still harmful.

"With this ban I want to protect young people from the damage e-cigarettes cause," said health state secretary Martin Van Rijn in a statement. "I also want to avoid young people thinking that these e-cigarettes in hip colours are normal."

The government said that studies carried out by the Dutch food safety and public health institutes had shown that e-cigarettes were "more harmful than expected" to users' health.

A recent U.S. study showed that teens and young adults who "vape" are more likely to graduate to smoking combustible cigarettes than those who do not.

The market for e-cigarettes is growing fast around the world as conventional smoking declines in response to massive public health campaigns and high sin taxes imposed on the practice.

Tobacco companies, including BAT, Philip Morris , Imperial Tobacco and Japan Tobacco, are all jostling for position in the emerging vaping market, which could top $7 billion in size this year.

The Netherlands will ban advertising of the devices when the new law comes into force in May 2016. E-cigarettes will be subject to new safety requirements and their packaging will have to carry health warnings.

The Netherlands, known for its relaxed attitude towards the consumption of soft drugs, is one of few countries left in Europe where it is still permitted to smoke indoors in certain bars.