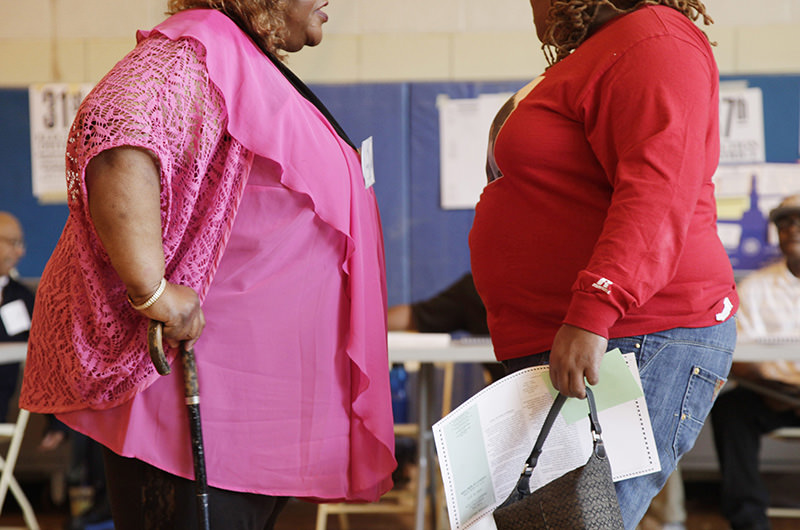 This file photo dated Tuesday, June 26, 2012, two overweight women hold a conversation in New York, USA. (AP Photo)
by Daily Sabah Dec 24, 2015 12:00 am
Weight-loss surgery, known as bariatric surgery, can reduce the risk of type 2 diabetes, heart attack, and other obesity-related health problems, according to a recent study conducted by the University College London and other British institutions.

Bariatric surgery includes a variety of procedures performed on people who have obesity. Weight loss is achieved by reducing the size of the stomach with a gastric band or through removal of a portion of the stomach or by resecting and re-routing the small intestine to a small stomach pouch.

The study, published in the journal PLOS ONE, analyzed data from the United Kingdom Clinical Practice Research Datalink, an observational and interventional research service that operates as part of the UK Department of Health. The researchers studied 3,882 bariatric surgery patients and followed their health status indicators from the pre-operative period until the post-operative period, over the course of 3 and a half years. They have later compared them to 3,882 obese patients who didn't have the surgery. 81 percent of the patients on whom the study was conducted, were women, while the average age of the patients was 45.

Compared to the group who did not have the weight-loss surgery, bariatric surgery patients were 70 percent less likely to have a heart attack and nine times more likely to have major improvements in type 2 diabetes, the study found. The surgery also had positive effects on angina and sleep apnea, blood pressure, the study findings added.

But of course, the study's findings do not suggest that surgery is for everyone, according to many experts, who think that the benefits of improving diet and becoming more physically active should never be discounted.

Obesity -- having an unhealthy amount of body fat -- is a growing threat to global public health. Worldwide, 13% of adults are obese, and, in the UK and the US, the statistics are even worse. A quarter and a third, respectively, of adults in these countries are obese. Obesity is defined as having a body mass index (BMI; an indicator of body fat calculated by dividing a person's weight in kilograms by their height in meters squared) of ≥30 kg/m2.
Last Update: Dec 24, 2015 11:50 am
RELATED TOPICS