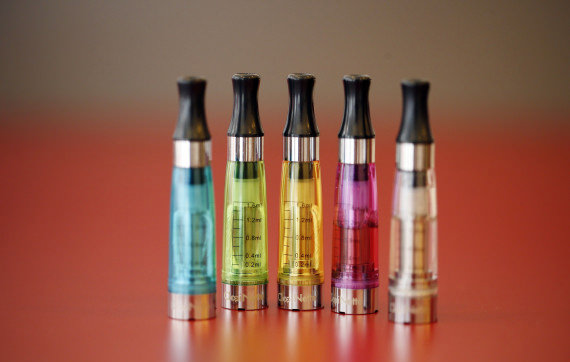 Some health experts are concerned about the rising popularity of the devices, which contain liquid nicotine cartridges that are flavoured like candy and fruit. (AFP Photo)
by French Press Agency - AFP Jan 14, 2016 12:00 am
E-cigarettes, touted as an aide for giving up tobacco, in fact lowers the odds of quitting success, claimed research Thursday that was immediately criticised as flawed.

A research duo from the University of California, San Francisco reviewed the findings of 38 studies conducted across the globe into e-cigarette use, and concluded that smokers who use the devices were 28 percent less likely to quit smoking tobacco.

Published in the journal Lancet Respiratory Medicine, it claimed to be the largest review of e-cigarette's value as a tool to help smokers kick the habit.

Looking at the data, it seemed that e-cigarettes in fact hampered attempts at quitting, the team said.

"The irony is that quitting smoking is one of the main reasons both adults and kids use e-cigarettes, but the overall effect is less, not more, quitting," co-author Stanton Glantz said in a statement issued by the university.

E-cigarettes are battery-powered devices that heat up a liquid containing nicotine and artificial flavouring. The vapour is inhaled -- "vaped" -- and exhaled, much like a cigarette.

In the last few years, health experts and watchdogs have been embroiled in debate as to whether the gadgets, often not strictly regulated, are safe.

They can also be used with nicotine-free liquids, but some fear e-cigarettes could be a gateway to "real" cigarettes for teenagers.

Experts who were not involved in the new study were cautious, some scathing in their comments.

The work, he said, looked only at current smokers who had at some point used an e-cigarette -- thus excluding any former smokers who may have used exactly such a device to quit.

Ann McNeill, a King's College London professor of tobacco addiction, said the review was "not scientific". It included data from two studies she had co-authored, but used in ways she claimed was "either inaccurate or misleading".

"I believe the findings should therefore be dismissed."

Steven Bernstein of the Yale School of Medicine, in a comment carried by The Lancet, said that despite concerns over the data, the study did raise questions about the usefulness of e-cigarettes as quitting aides.
Last Update: Jan 14, 2016 8:24 pm
RELATED TOPICS