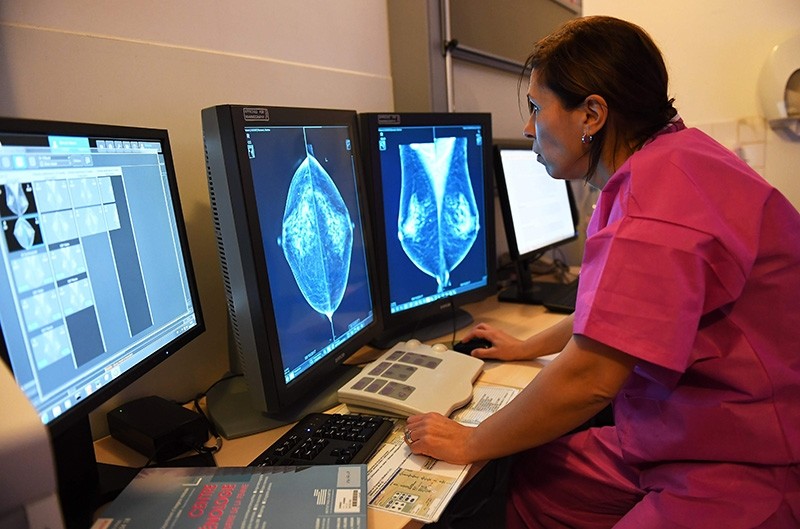 This file photo taken on October 9, 2017 shows a patient having a breast ultrasound, at the Paoli-Calmette institute, a fight against cancer regional center. (AFP Photo)
by Nov 18, 2017 12:00 am

Many women who follow initial breast cancer treatment with five years of hormone therapy to keep tumors at bay may still experience new malignancies up to two decades after their diagnosis, a study suggests.

Researchers examined data from 88 clinical trials involving 62,923 women with estrogen receptor (ER)-positive tumors. After treating ER-positive tumors with chemotherapy, radiation or surgery, women typically get five years of follow-up therapy with daily hormone-based pills – either tamoxifen or aromatase inhibitors. The goal of the adjuvant therapy is to destroy any lingering cancer cells not killed by initial treatment.

All of the women were cancer-free when they completed five years of adjuvant hormone-based therapy.

During the next 15 years, however, cancer returned for 41% of the highest-risk women in the study who originally had the largest tumors that had spread the most beyond the breast, the study found.

Even the lowest-risk women who originally had small tumors that hadn't spread to the lymph nodes or other parts of the body still had 10% odds of cancer coming back during the study, researchers report online November 13 in the New England Journal of Medicine.

"We now have good evidence that extending adjuvant (hormone-based) therapy beyond five years continues to suppress and reduce recurrence and mortality," Hayes said by email.

Doctors have long known that five years of tamoxifen reduces recurrence by approximately half during treatment, and by nearly a third over the next five years. Aromatase inhibitors, which work only in post-menopausal women, are even more effective than tamoxifen at reducing recurrence and death from breast cancer.

Some recent research suggests an additional five years of hormone-based therapy is even more effective, but the side effects make some women reluctant to continue. Life-threatening side effects are rare, but women taking these hormones can have menopause symptoms like hot flashes and vaginal dryness.

The data suggest that women with ER-positive breast cancer should at least consider continuing adjuvant therapy beyond five years, the authors conclude.

"Breast cancer cells can travel from the primary tumor to the lymph nodes and can circulate throughout the body undetectable with current screening (methods) and over time, these circulating cancer cells can attach to other organs in the body and this is generally when there is a detectable cancer recurrence," said Albert Farias, a cancer researcher at the Keck School of Medicine of the University of Southern California in Los Angeles who wasn't involved in the study.

"One way that adjuvant breast cancer treatment works is to kill and/or stop the undetectable cancer cells from growing and dividing," Farias said by email.

Even though the study suggests some women may have more risk of recurrence based on their original tumor characteristics, it can still be hard to predict and women need to remain vigilant, said Dr. Sharon Giordano of the University of Texas MD Anderson Cancer Center in Houston.

"Breast cancer can be dormant for many years, so that women can have no apparent disease, but can still recur years later if the tumor becomes active again," Giordano said by email. "We do not know why some cancers become active again after years of dormancy."

Women need regular checkups and breast screenings, as well as annual mammograms, said Dr. Alana Biggers, a researcher at the University of Illinois-Chicago who wasn't involved in the study.

"If a woman is high risk for breast cancer, such as a lady with a gene mutation, she may need both mammograms and breast MRIs," Biggers added by email. "Additionally, women should maintain a healthy weight, exercise, stop smoking, and limit alcohol consumption to reduce their risk of recurrence."