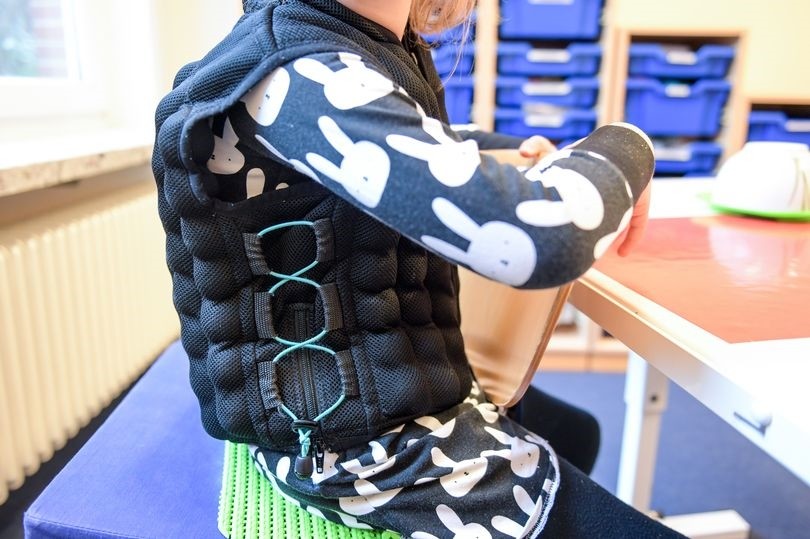 German schools are asking hyperactive children to wear heavy sand-filled vests claiming it helps children to stay calm and keep them in their seats.

Claiming the heavy vests help to curb children's restlessness, advocates of the vest say they have witnessed a remarkable change in the behavior of hyperactive students who have worn the vests.

"Children love to wear the vests and no one is forced into wearing one against their will," claimed Gerhild de Wall, head of the inclusion unit at the Grumbrechtstrasse school.

"Children who fidget a lot or have a sensory disorder often have problems being able to sort out one stimulus from another," she said. "The vests help them to have a better sense of themselves."

But many parents and psychiatrists have serious concerns.

"It would be best if we avoided such torture methods. How can you say to a child, 'You're sick, and as a punishment, you have to wear this sand-filled jacket which is not only physical agony but will make you look like an idiot in front of the rest of the class.' I think some people have lost the plot?" a parent who wrote on Facebook said.

Also, many psychiatrists are skeptical about the vests' use, especially without knowing their long-term effects.

"The vests are 'ethically questionable' and could easily be interpreted as a single remedy to fit all attention deficiency disorders. School put too much emphasis on ensuring children change their behavior to fit the class, hater than focusing on the child's individual problems." said Michael Schulte-Markwort, director at the Child and Youth Psychiatry University Clinic.

Michael in the northwestern Hamburg district of Eppendorf, told German newspaper Die Tageszeitung the vests were "ethically questionable" and could easily be interpreted as a single remedy to fit all attention deficiency disorders.

Mr. Schulte-Markwort also criticized the fact that in schools too much emphasis was placed on ensuring a child changed their behavior to fit the class, rather than focusing on the child's individual problems. "We should be doing that far more," he added.

Attention deficit hyperactivity disorder (ADHD) consists of a series of behavioral symptoms that include inattentiveness, hyperactivity and impulsiveness that tend to be noticed at an early age and most cases are diagnosed when children are six to 12 years old.