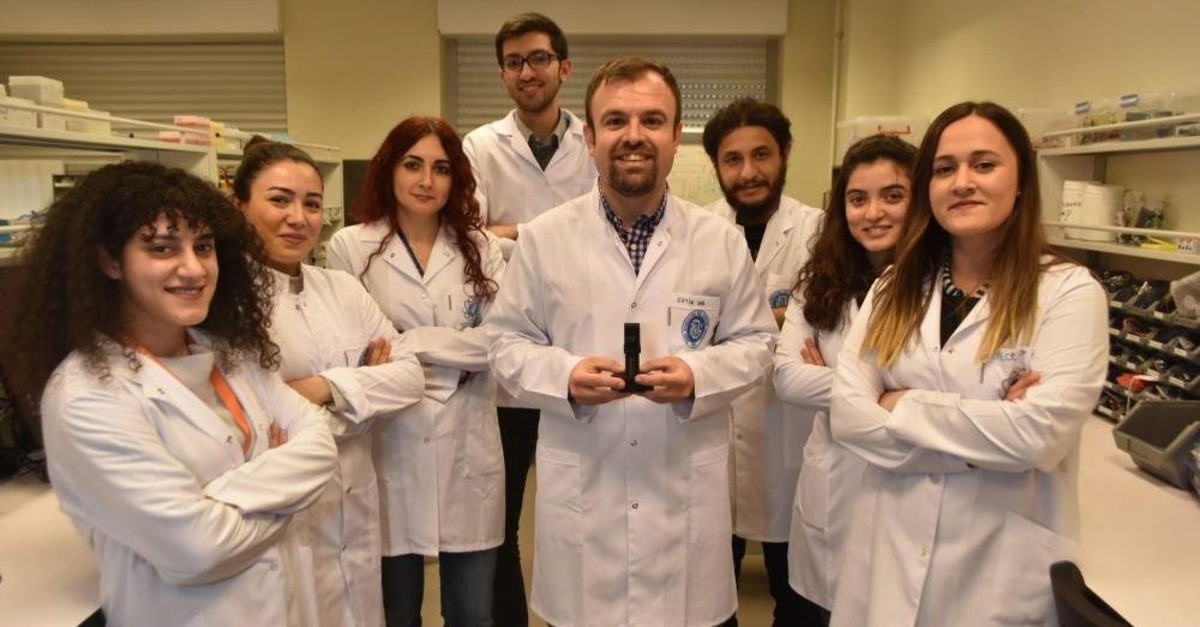 The hand-held gadget is the first and only of its kind in Turkey. (DHA Photo)
by Daily Sabah with Agencies Feb 02, 2020 11:55 am
A group of scientists from the İzmir Biomedicine and Genome Center has developed a small portable device that detects the H1N1 virus in less than five minutes.

The 70-gram handheld gadget is expected to become a game-changer in the war against H1N1, commonly referred to as "swine flu."

The scientists say even though it is still being tested, obtaining a patent followed by mass production is the main goal. Dr. Arif Engin Çetin, head of the team, emphasized the pros of the device: "Conventional methods used for detection are carried out by imported devices. Our device is, on the other hand, fully produced in Turkey."

"We use a smart biochip sensitive to antibodies," Dr. Çetin said. "The biochip takes a picture of the mucus with its camera, and then we use our software to analyze the picture to uncover whether the example contains the H1N1 virus. Tests are still ongoing. Our goal is to obtain its patent and proceed to mass production."

At a low cost of roughly TL 3,000, making it accessible for almost every health institute, the device was developed over a year and a half, inspired by the infamous pandemic in 2009 with a death toll of 201,200. Zeynep Ahsen Koçer, one of the leaders of the team, said: "It caused a global pandemic in 2009. Between October 2019 and January 2020, the virus killed more than 20,000 people."

The swine flu is characterized by common flu symptoms — sudden fever, muscle aches, sore throat and dry cough — but may cause more severe vomiting and diarrhea.

This strain has been confusing to scientists because it is an H1N1 — a type that has been around since the 1918 "Spanish Flu" pandemic that killed at least 40 million people globally.
RELATED TOPICS