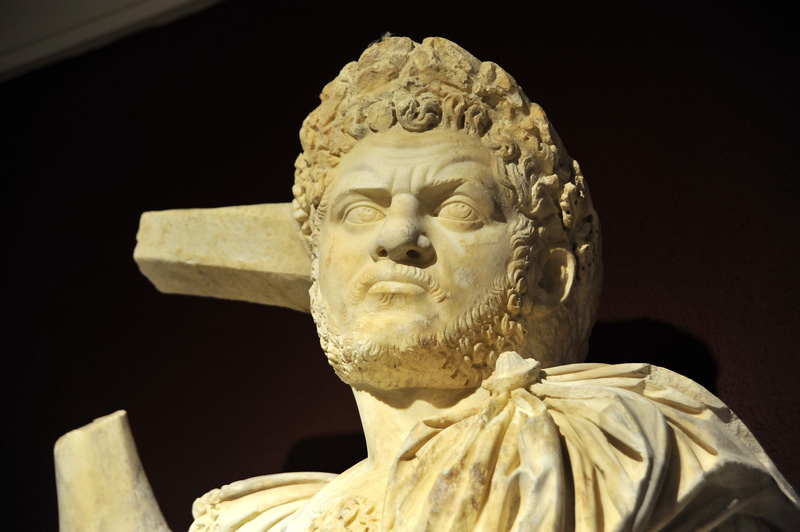 Archaeologists have unearthed 13 unique sculptures, including sculptures of Roman Emperor Caracalla, the goddesses Selene, Nemesis, Tykhe as well as a horse, in the ancient city of Perga in Antalya during excavations that have been ongoing for three years

Located within the borders of the Aksu district, 17 kilometer east of Antalya's city center, the ancient city of Perga has been undergoing excavations since 1946. As all the sculptures and artifacts are being exhibited in the Antalya Museum, the ruins help the museum to be "one of the museums in the world that has the richest Roman era sculpture collections." During excavations conducted by the Directorate of the Antalya Museum since 2012, 13 sculptures have been unearthed by archaeologists, including sculptures of Roman Emperor Caracalla, the goddesses Selene, Nemesis, Tykhe and a horse, which were brought to light in the last three years, recently started to be exhibited in Perga Hall in Antalya Museum.

In a statement to Anadolu Agency (AA), Perga excavations head and Antalya Museum Director Mustafa Demirel said that excavations of the ancient city were undertaken by Istanbul University until 2012, but the Culture and Tourism Ministry authorized their directorate to then carry out excavations.

He reported that they were able to reach a door that opens onto the necropolis from the main western road in the city during excavations from 2012 to 2014. "We continued to excavate around the door this year. We gave great importance to the rehabilitation of the southern and northern main roads to enable visitors to better look at the ancient city," he said. Demirel said that the fountain, which was discovered next to the public bath in the northern part of the city, is one of the discoveries that has made the excavation team extremely happy: "Following the excavation of the fountain, we discovered the sculpture of Caracalla. This artifact is the only sculpture of the Roman Emperor Caracalla that was discovered in one piece."

Sculptures of mythological gods and goddesses as well as the sculpture of a horse that was unearthed in the ancient city are being displayed in Perga Hall in the Antalya Museum, which was opened by Culture and Tourism Minister Ömer Çelik on March 18, International Museum Day.

Demirel said that the Culture and Tourism Ministry's Museums Directorate General Manager Abdullah Kocapınar made great contributions to the excavation in Perga and said that an area covering 350 meters has been unearthed during excavations in the last two years.

The ancient sculptures found in Perga:

- Sculpture of a horse: Discovered in front of the fountain located on the main western road, the sculpture is 1.4 meters high and stands out due to its craftsmanship and the detail of equine anatomy.

- Sculpture of Selene: The moon goddess Selene was the daughter of the Titans Hyperion and Theia and the sister of the dawn goddess Eos. The sculpture is 2 meters high.

- Sculpture of Nemesis: Nemesis, the goddess of divine retribution against those who succumb to hubris, is the daughter of Nyks, the Greek goddess of the night. The sculpture is 1.7 meters high, and the goddess is wearing a transparent dress that reveals one shoulder.

- Sculpture of Tykhe: Also known by her Latin name Fortuna, Tykhe is the goddess of fate. The sculpture carries a fertility horn in one hand and wears a crown. Tykhe was honored by the city and chosen as the Goddess of Perga.

- Sculpture of Asclepius: Asclepius, the son of Apollo, was the god of medicine in ancient Greece. The god is depicted wearing a cloth holding a stick in one hand and a medicine plane in the other hand.

- Sculpture of Aphrodite no. 1: Aphrodite is the goddess of love and beauty. The sculpture was found in pieces and later reconstructed.

- Sculpture of Aphrodite no. 2: This sculpture was discovered inside a pool and is 1.6 meters high. The goddess is naked in a bathtub.

- Sculpture of a priest: The sculpture features two snake reliefs on the neck of the priest who in full clothingand holding a fertility horn in one hand.

- Sculpture of Athena: Athena was the Greek goddess of wisdom, courage, inspiration, civilization, law and justice, mathematics, strength, war strategy, the arts, crafts and skill and was the patron goddess of Athens. The goddess is depicted in full armor. The sculpture stands out due to its craftsmanship.

- Sculpture of a woman: The woman is wearing a long dress and a coat. The head of the sculpture has not yet been discovered.

- Sculpture of a man: The man is holding a roll of cloth and a sword . The headless sculpture's identity is still a mystery.