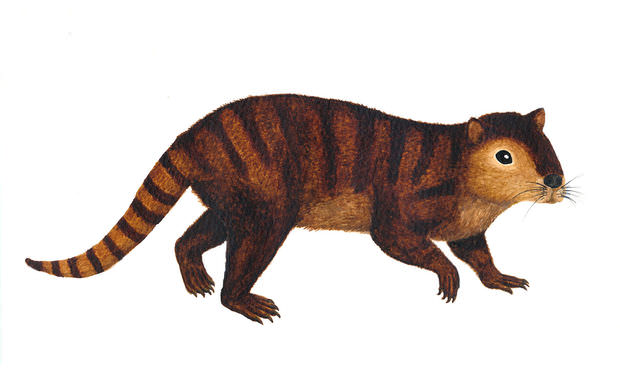 Photo courtesy of Sarah Shelley, University of Edinburgh
by Associated Press
Oct 05, 2015 12:00 am
Fossils found by a University of Nebraska-Lincoln student in New Mexico have led to the discovery of a new genus and rodent-like species.

According to the Lincoln Journal Star, the fossils were found in May 2014 by then-sophomore Carissa Raymond in New Mexico's San Juan Basin, during her first fossil hunt. She saw a row of small black teeth coming out of the ground.

"I knew it was different and big and had very interesting teeth," Raymond said. "But I couldn't have told you it was something new."

Raymond blanketed the fossilized jawbones and a partial skull roof in toilet paper and took them to Thomas Williamson, curator at the New Mexico Museum of Natural History and Science.

"When Carissa found this thing and brought it to me, I instantly suspected it was new," Williamson said in a release from the University of Nebraska. "I'd never seen anything like it before."

A paper published Monday by the Zoological Journal of the Linnean Society says the new species, named Kimbetopsalis simmonsae, was alive roughly 65 million years ago during the Mesozoic and Paleocene eras. Researchers believe the rodent-like animal weighed as much as 45 pounds (20 kilograms).

Raymond has since gone on several more fossil hunts in the western United States. But her other finds don't compare to her first.

"This was beginner's luck, but I was very lucky," Raymond said.