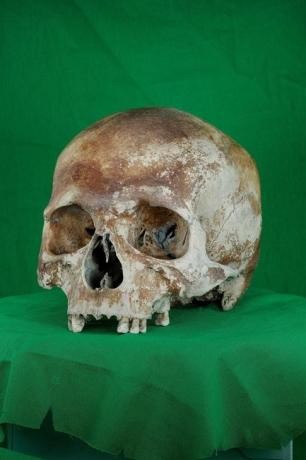 The skull is part of a collection of 3D scans of human remains, shoes and tools which people who cannot make it to the ship's museum home can see on www.virtualtudors.org.

The detailed, interactive images are part of a bigger scientific project on the website aimed at researchers working in the field of bone science.

Nine other Mary Rose skulls can be viewed by archaeologists, osteologists and forensic anthropologists who will take part in a study into the usefulness of 3D models to the world of science.

While experts identify historic features of the virtual images hidden to the layman, ordinary users can still zoom in on the carpenter's eyebrow wound and rotate to the image to see his bad teeth.

He would have been on board to carry out repairs which occurred during battle, like the one against an invading French fleet in 1545 during which the Mary Rose sunk off the south coast of England.

After hunting for years, divers discovered the wreck in 1971, along with over 19,000 artefacts and the bones of 179 of its crew, providing historians with an insight into Tudor life at sea.

The ship was raised from the seabed in 1982 and is now on display at a museum in Portsmouth.