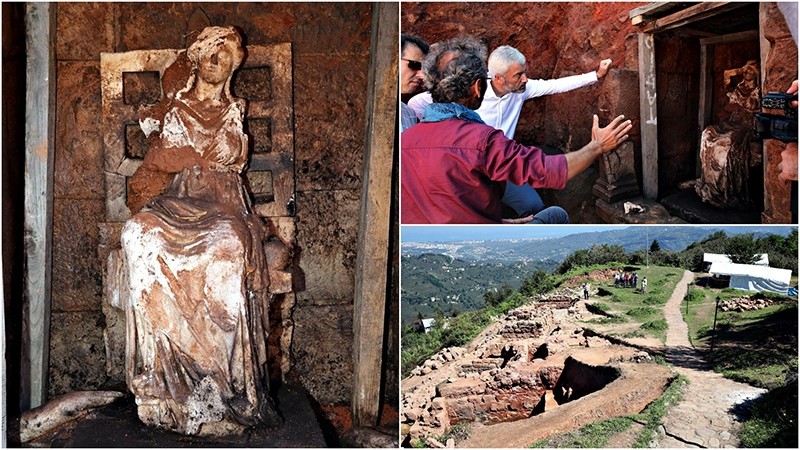 An estimated 2,100-year-old rare marble statue of Cybele, the mother goddess of Anatolia, has been unearthed in excavations in northern Ordu province located on the Black Sea coast.

The historic sculpture of Cybele sitting on her throne weighed a whopping 200 kilograms and was about 110 centimeters tall.

The statue is also the first marble statue found in Turkey in its original place.

The ancient artifact was unearthed in excavations launched by a team of 25 archeologists led by the head of the Department of Archeology in Gazi University, Prof. Dr. Süleyman Yücel Şenyurt, in the 2,300-year-old Kurul Kalesi, or the Council Fortress.

"We are continuing our work non-stop. Two days ago we found an extraordinary artifact. According to our research, the statue remained intact after the walls of the entrance of the fortress of Kurul collapsed during an invasion by Roman soldiers. This statue has also shown us that the fortress of Kurul in Ordu was a very important settlement [in ancient times]," Prof. Şenyurt said.

Saying that it was an incredibly rare find, the professor said that they were proud to unearth such an artifact in Turkey. He also said that the priceless statue would be later on transferred to the archeology museum in Ordu.

The professor also said that the first attempts to conduct excavations in the area were made ​​about 6 years ago, but had been postponed for various reasons.

Meanwhile, Mayor Enver Yılmaz also pledged to provide TL 500,000 in funds to all excavations in the fortress of Kurul. He also said that the fortress will be turned into an open air museum in the near future and hopes the excavations will contribute to tourism in the region as well as in Turkey.

The excavations in the fortress are also the first archaeological diggings on the eastern coast of the Black Sea.

Cybele, an Anatolian mother goddess, is the symbol of prosperity with her pregnant belly, seated on her throne.

In Anatolian mythology she was the personification of the earth. In Greek mythology in which she was equated to Earth-goddess Gaia, Cybele was mostly associated with fertile nature, mountains, town and city walls, as well as wild animals such as lions.